It was reported in the Jerusalem Post that during the recent Rennert/Bar-Ilan University’s conference on “New Studies on Jerusalem”, Zachi Zweig pointed out that during reconstruction work at the El-Aqsa mosque in the 1930’s, the remains of a Byzantine mosaic floor and a mikveh (Jewish ritual bath) were discovered. The mikveh was located below the Byzantine floor.

This is an important discovery and will change our views on the history of the Temple Mount. The mosaic floor may or may not have belonged to a church. More information is necessary before deductions can be made about the nature of the building, but the mosaic pattern possibly indicates a public building.

The mikveh would be the third we know of on the Temple Mount, as two other ones have been identified previously by Ronnie Reich. He based his proposal on the shape of the shape of Cisterns 6 and 36 (1 and 2 on Warren’s map of the Temple Mount below). The exact location of the newly published mikveh (3) inside the El-Aqsa mosque is not yet known. However, this nevertheless proves the Jewish origin of the Temple Mount. 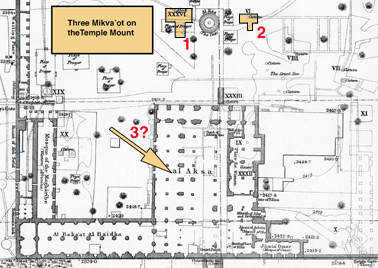