Just over a week ago I led a tour through the Western Wall tunnels and saw some very deep excavations between the foundations of buildings which date from the Mamluk period (14th-15th Century AD). Excavations are continuing until bedrock is reached. Several mikva’ot (Jewish ritual baths) from the Second Temple period were observed – an indication that Jerusalem was indeed Jewish at the time. Here is a picture I took of one of the deepest excavation pits: 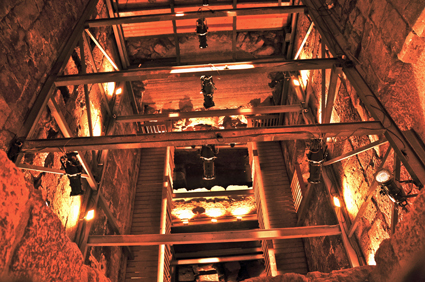 Joe Lauer sent me this report, showing that not everybody is happy with the excavations. The title of the article is misleading, as no excavations are conducted inside the Temple Mount. The Muslim claim that tunnels are dug within the Temple Mount are not true. The whole area lies to the west of the Temple Mount. An invitation to tour the area was turned down by Muslims. How can one reach understanding when dialogue is refused?

3 thoughts on “A peek into excavations near the Temple Mount”