Libraries have transformed our lives. Living in Jerusalem, as we did for many years, we had access to some of the world’s greatest libraries. The Hebrew University had the largest collection of works on Jewish culture (many donated by supporters of the fledgling State of Israel). Sadly, some of these precious volumes were vandalised by students, with many of the books’ spines broken due to photocopying or even missing pages! Our professor, Benjamin Mazar, also had a prodigious book collection at his home in Rehavia, which he shared very generously with us. It was the library of the École biblique et archéologique française, however, that blew our bibliophile’s socks off. Here, such solicitous care was taken of the library’s 140,000 volumes, that a “fantôme”, or mock volume had to replace every book that was removed, until said book was returned to safety. 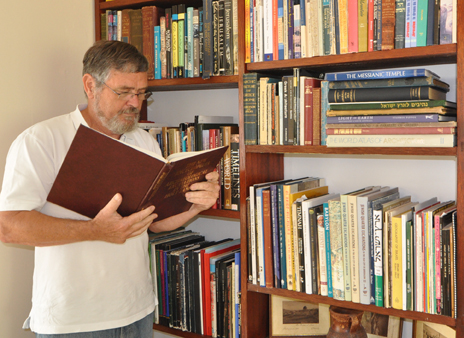 The more we read, the more the city of Jerusalem and the Land of Israel stepped out of the shadows and into our comprehension. We were cool university students no longer, when we perhaps did not appreciate the richness of the Library of the Academy in Arnhem or Dublin’s splendidly domed National Library. We hungered to understand the lessons that the past of our adopted country could teach us.

Reading Jerusalem Revealed, when it came out in 1975, was an epiphany, making sense of the results of the explosion of excavations that had become possible after the 6-Day War. We carried single volumes of Josephus around in our pockets, seeking his contemporary witness to the ancient city we were trying to build up in our minds. We scrutinised the tractates of the Mishnah, some of which were written by rabbis who had observed the ritual of the Temple prior to its destruction in 70 A.D. Each book stood out like a milestone and we felt that we were becoming the sum of the books we had read. We must remember that because of the unprecedented opportunities in archaeology at that time, there was a flowering of works reporting on the dramatic new discoveries. Kathleen remembers comparing the books that were appearing then, with the single book, Kenyon’s Archaeology in the Holy Land, that was recommended for her course on this subject in University College Dublin in the early 70’s!

Now we live in Cardiff, Wales, far from the enticements of the Bodleian and British Libraries. However, due to our drawings being printed in numerous publications and the requests for book reviews we receive, we have managed to amass our own extensive private library. We can truly say that our books transport us every day to the Land, allowing us to live a life unfettered by sea or border crossings. In our book-lined space, we can explore Jerusalem’s Gihon Spring, walk around the destroyed city walls with Nehemiah or bring in our boat to harbour in first century Capernaum – all without leaving our chair.

Despite the dominance of Google, we are often asked to recommend books to our readers. For that reason, we hope to regularly post reviews of publications (and occasionally movies or software) we consider useful, defining and illuminating. Look under the Recommended menu for reviews of works that will stand the test of time!

2 thoughts on “Lost in words – Recommendations from our library”