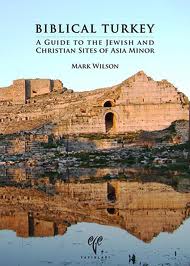 Biblical Turkey is one of those rare books that will move only from our desks to our rucksacks. It might not ever make it to our bookshelf and in order to facilitate lending it out, we will have to purchase another copy! Much-anticipated and prodigiously researched, the publication of this small triumph fills a huge gap in the guide literature to Turkey, a country which Wilson points out that, apart from Israel, has more Biblical sites than any other country. He emphasises illuminatingly, that: “approximately two thirds of the New Testament was written either to or from Asia Minor.”

Now the most sought-after tour guide to Biblical sites in Turkey, the New Testament scholar would attribute his expertise to the nine years he has spent actually living in the country with his wife. In the introduction, he writes: “I have travelled tens of thousands of miles/kilometers via plane, train, boat, bus, minibus, taxi, dolmuş, and on foot, visiting nearly every site mentioned in this volume.” When you consider that over one hundred sites, spread over seven regions, covering 9412 square miles, are discussed here, that is a staggering achievement. And being steeped in the works of William Ramsay, whose The Letters to the Seven Churches of Asia and The Cities of St. Paul were controversial classics, (Wilson was Revising Editor for a number of Ramsay’s works) was a rigorous early schooling. Previous to the issue of Biblical Turkey, one had to rely on the easily procurable Fant and Reddish’s, A Guide to the Biblical Sites of Greece and Turkey (Oxford, 2003), (which actually only covered 24 sites in Turkey) and the books one was fortunate enough to pick up when visiting the various sites. On this last matter, Wilson writes that his “rule of thumb with books in Turkey is this: if you see a book you’re interested in, buy it immediately because you might never find it again.” We can vouch for the truth of this statement!

Wilson has gone with a Turkish publisher Ege Yayinlari, whose website says that they publish “everything that helps to understand the past of Turkey.” The book’s layout provides much to feast on. For some sites, we are given, apart from the expected site information, a section called Ancient Voices, which features the words of a local author. For example, at Antioch on the Orontes, the Seleucus Inscription may explain why the family of Paul was granted Roman citizenship. Sections called Sidetrips direct you to nearby sites of Biblical interest. The In-Site section is the most valuable of all, providing unique insights into the Biblical text. Questions that have exercised commentators, such as Why did John Mark leave Paul and Barnabas and the reason for Paul’s Walk to Assos are given reasonable answers that are informed by intimate acquaintance with the terrain involved.

The photographs are stunning and a labour of love. We were intrigued to read Wilson’s words in an interview that was published online: “I really love the cover photograph, which was taken in March 2008 at Miletus. Normally I’m not at the site in the evening. Rainwater was standing in the area that used to be the theater harbor. I was able to catch the reflection of the theater in the water just as it would have appeared in antiquity.” There is no such comment in the book, which brings us neatly to the only quibble we would have with it. That is, that it is clear that Wilson was under tremendous pressure to be brief, resulting in a rather dense volume. This means that when you go to a site to read up on it, you come away feeling cheated, fully aware that he knows much more than he is able to give here. On the other hand, you realise how up-to-date the book is when you visit sites such as the recently excavated Laodicea which is presently being restored. Here, Wilson’s notes nicely supplement the site’s excellent new information panels.

You certainly cannot travel in Turkey with only this book in your luggage. Wilson states that he always carries one of the well-known guide books such as a Rough Guide or a Lonely Planet and that he will not be providing directions to sites, only when: “the site is obscure and not known generally through other means.” We think he might revise this decision for some sites that are fiendishly difficult to find, such as Colossae!

We found this evocative, unexcavated mound, under the snow-capped peak of Mt. Honaz, only because we had looked it up in advance in Google maps. None of our friends who have toured Turkey, bar one, have been able to find it. Even the local policeman, parked a mile away from the site, did not know where it was! It would also be helpful if the maps could be standardised for the next edition, as they were taken from relevant prior publications and not made especially for this book.

As an aside, it is inspiring to learn that Wilson was galvanised to commence his Asia Minor Study Centre in Izmir, which focuses: “on the intersection of early Judaism and Christianity in the Greco-Roman world in Asia Minor,” by a short study programme he followed in Jerusalem. Here he saw the abundance of study centres devoted to the history and archaeology of Israel and compared that with the complete absence of an equivalent in Turkey. Now he directs two non-profit organisations in the country, the latter and the Seven Churches Network which provides more general information on Turkey and its Biblical sites.

We sincerely hope that this pioneer’s wonderfully clear-eyed book will get the distribution and the sales it deserves. Order from www.zerobooksonline.com

Update 12/03/’10: Mark Wilson informed us that his book will be distributed by David Brown/Oxbow Books in North America and the UK, hopefully in the near future.

2 thoughts on “Recommended: Biblical Turkey, A Guide to the Jewish and Christian Sites of Asia Minor”