An exhibition “Building Solomon’s Temple” will be held from January 17 – May 27, 2011, in The Library and Museum of Freemasonry, Freemasons’ Hall, 60 Great Queen Street, London WC2B 5AZ, UK. Hopefully the snow will have disappeared by then. 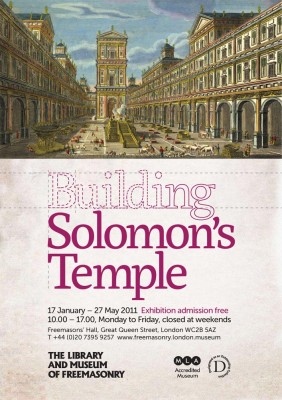 For more than 200 years, the concept of Solomon’s Temple in Jerusalem had been central to organised freemasonry and had influenced its symbolism, architecture and ceremonies. Biblical scholars and early freemasons had only been able to use the few biblical references to construct their images of the Temple on paper and later on ceramics, textiles and glass. Napoleon’s expedition to Egypt reawakened interest in the Middle East.

The formation of an English lodge in Jerusalem was the result of the opening up of the area to archaeology and tourism from the middle of the nineteenth century in which many freemasons were involved. Freemasons such as the American Rob Morris and Sir Charles Warren journeyed to Jerusalem on archaeological excavations and wrote about their visits. The recovery of archaeological remains and the development of tourism enabled them to bring back tangible fragments to furnish English lodge rooms and reinforce the imaginary Masonic temple.

During his work in Jerusalem, Charles Warren discovered an underground hall near Wilson’s Arch, which he called the “Masonic Hall”. In his book Recovery of Jerusalem, p.87, Warren writes:

This chamber acquired the name of the Masonic Hall from some circumstances connected with its discovery.

It is not difficult to imagine what these circumstances were. The above-mentioned Dr. Robert Morris was Past Grand Master of the Grand Lodge of Kentucky, who, on the 13th of May, 1868, during a freemason’s convention in Jerusalem directed a Secret Monitor Ceremony in the Cave of Zedekiah, popularly known as King Solomon’s Quarries, deep under the walls of the old city of Jerusalem. This ceremony took place at the time when Warren had just discovered this underground hall. Being a freemason himself, Warren called this building the Masonic Hall in honor of the ceremony.

The building has been identified as the Council Chamber, mentioned by Josephus in his description of the First Wall (War 5.142-144). It was one of the buildings where the Sanhedrin met.