To celebrate its 50th anniversary, the society has invited Prof. Ami Mazar to lecture on: “Archaeology in Israel: Achievements and the current state of research”. The lecture will take place at the Stevenson Lecture Theatre in the British Museum, London at 6.00 pm on Monday, June 27th.

The Anglo-Israel Archaeological Society (AIAS) was founded in 1961 by Professor Yigal Yadin, Dr Alec Lerner, Leon Shalit and Dr Richard Barnett. The aims of the society are to: 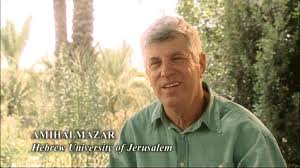 Ami is one of Israel’s most outstanding archaeologists, with an impressive record of research and excavations. He has been a good friend since 1973, when we participated in an IDF archaeological survey of the Bashan region, southeast of Mount Hermon. After producing publication plans of his excavations at Tel Qasileh, I worked as surveyor for Ami at Tel Batash (Timnah of the Philstines) from 1978 till 1989.

His lecture will be of great interest to lovers of Israel and its history.