Recently, the ground level near the new generator room north of the raised platform was lowered by one foot. This work exposed an unknown course of stones from an earlier phase of this wall. This course could be dated to the Early Umayyad period or even the Herodian Period. L. Ritmeyer suggested that the foundation of this course was the original northern wall of the Temple Mount, and there is evidence for this thesis in various spots along this line.

Zachi sent me a photograph showing a line of large stones below the northern wall of the raised platform.

Needing more information, I asked a friend of Nathaniel, one of my sons, to send me additional photographs showing what is happening on the Temple Mount at present. The location in question is to the east of the eastern stairway that leads up to the raised platform from the north:

In the following picture, we see the area below the blue container that was lowered by about 1m. (3 feet): 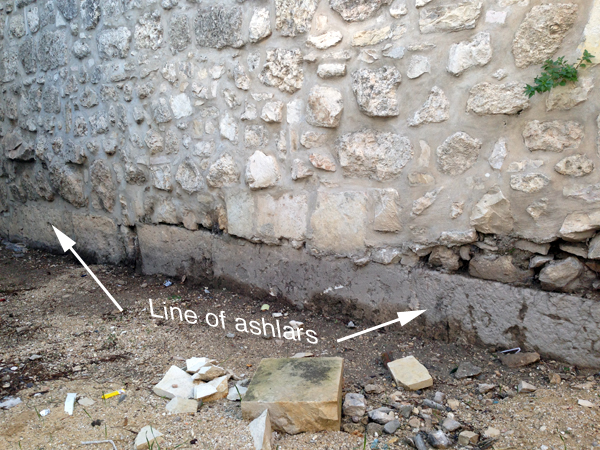 It is difficult to say when this monumental masonry was built, but it is located along the line of the northern wall of the raised platform, which we had previously (The Quest, pp. 165-186) identified as the northern boundary of the pre-Herodian Temple Mount. To the west of this same line is the northwest corner of the 500-cubit square Temple Mount of the First Temple period and we had suggested that this was built by King Hezekiah:

To the east of the newly discovered masonry there are equally large stones to be seen at the northeast corner of the raised platform.

Putting these three points together, we see that all three masonry remains lie on the northern boundary of the ancient square Temple Mount:

The masonry at the northwest corner of the square Temple Mount is characterised by rough bosses, while the other two sections have smooth masonry. It is possible that these two sections were built at a later time, above earlier masonry.

Reviewing the discovery of this new wall, we can see that it lies on the northern boundary of the ancient Temple Mount. It is unlikely that this wall was built in the Umayyad period as no other masonry of this calibre can be seen anywhere in the outer walls of the raised platform. No major building projects were carried out on the Temple Mount in the Byzantine period. That leaves us with either the Roman (Aelia Capitolina) or the Herodian period. Although we cannot prove it, the latter would be an exciting possibility! In any case, the fact that monumental masonry is built on the northern boundary of the ancient Temple Mount appears to confirm the location of the square Temple Mount of the First Temple period.

All this goes to show that many more archaeological remains may still be hidden below the surface of the Temple platform and how much more we could learn if excavations were made possible! This would be extremely valuable, as only excavation would make it possible to identify the period of these wall remains.

30 thoughts on “New Discoveries on the Temple Mount in Jerusalem”