On Wednesday the 6th of May at 21.00pm, and Thursday the 7th of May at 13.00, an episode called “The Search for Sodom” in the series of “Secrets of the Bible” will be broadcast in the UK. This will be on Yesterday TV (Freeview Channel 19, Sky Channel 537), with the programme being available on UKTV Play service for the following week. 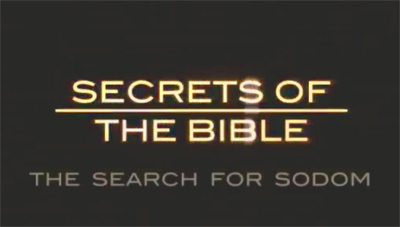 It tells the story of how Dr. Steven Collins found the location of the ancient city of Sodom. Steve Collins is dean of the College of Archaeology and Biblical History at TSW University, Albuquerque NM, USA.

I first met Steve in 1996 at the excavations of Kh. El-Maqatir, a site in Benjamin in the Land of Israel that the excavator, Dr. Bryant Wood, believes to be biblical Ai (Joshua 8). Steve has researched the geographical and archaeological evidence for the location of the biblical city of Sodom for almost two decades until he found the site of Tall el-Hammam, based on his reading of Genesis Ch. 13.

Genesis 13 contains many geographical pointers that tell us exactly where Sodom was located. This chapter tells us that Sodom was located east of Bethel/Ai (vs.11) and situated in the Plain of the River Jordan. The Hebrew word for “Plain” is kikkar– a flattish round area, geographically located at the southern end of the River Jordan. This round area can easily be seen on any map or satellite image of Israel.

The TV program details one of the major finds in Tall el-Hammam, that being the gate mentioned in Genesis 19.1: “Lot sat in the gate”. The first evidence of the gate was found in 2012:

The remains of several towers, including a large flanking tower, made it possible to draw a preliminary reconstruction drawing of the facade of the gate of Sodom:

We expected to find a gatehouse with chambers during the digging season the following year. The gatehouse was indeed found, but instead of internal chambers, many column bases were discovered, giving this gatehouse an internal layout that was highly unusual in the Ancient Near East.

Many other exciting finds were made, such as melted potsherds and burnt skeletons, that testify to a terrible and fiery destruction, reminiscent of that described in Genesis 19. If you have the opportunity, “The Search for Sodom” is well worth watching!

11 thoughts on “The Search for Sodom”