This year is the 200th anniversary of the birth of Constantine Tischendorf, the German scholar who discovered the Codex Sinaiticus, the oldest (4th century AD) copy of the New Testament text of the Bible, at St. Catherine’s Monastery in the Sinai. He not only discovered the manuscript, but also managed to have it removed to Russia, promising to return it to the monastery. This, however, never happened and therefore Tischendorf has been not only lauded for having discovered it, but also labeled a thief for not having returned it. Because of economic hardship, the Codex was eventually sold by the Russian National Library to the British Library, where it remains until now. 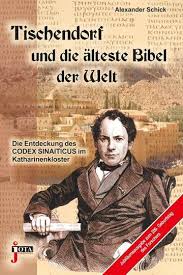 Our friend Alexander Schick has researched the work of this German scholar and published a book, called Tischendorf and the oldest Bible of the World (German).

This Wednesday, at Room 211 of the Rothberg Institute, Hebrew University, Jerusalem, he will give a lecture from 6.30-8.00pm, entitled:

“Genius or Thief? Constantine Tischendorf Turns Two Hundred – the life of the famous biblehunter and the case of the Codex Sinaiticus in the light of newly discovered documents from his personal archives”

If you happen to be in Jerusalem this week, we warmly recommend attending Schick’s lecture.

In the Sep/Oct. 2015 issue of Biblical Archaeology Review, Stanley Porter, in an article called “Tischendorf on Trial for Removing Codex Sinaiticus, the Oldest New Testament”, investigates the allegations against Tischendorf in light of new evidence from the Russian archives.