Was it white or black? 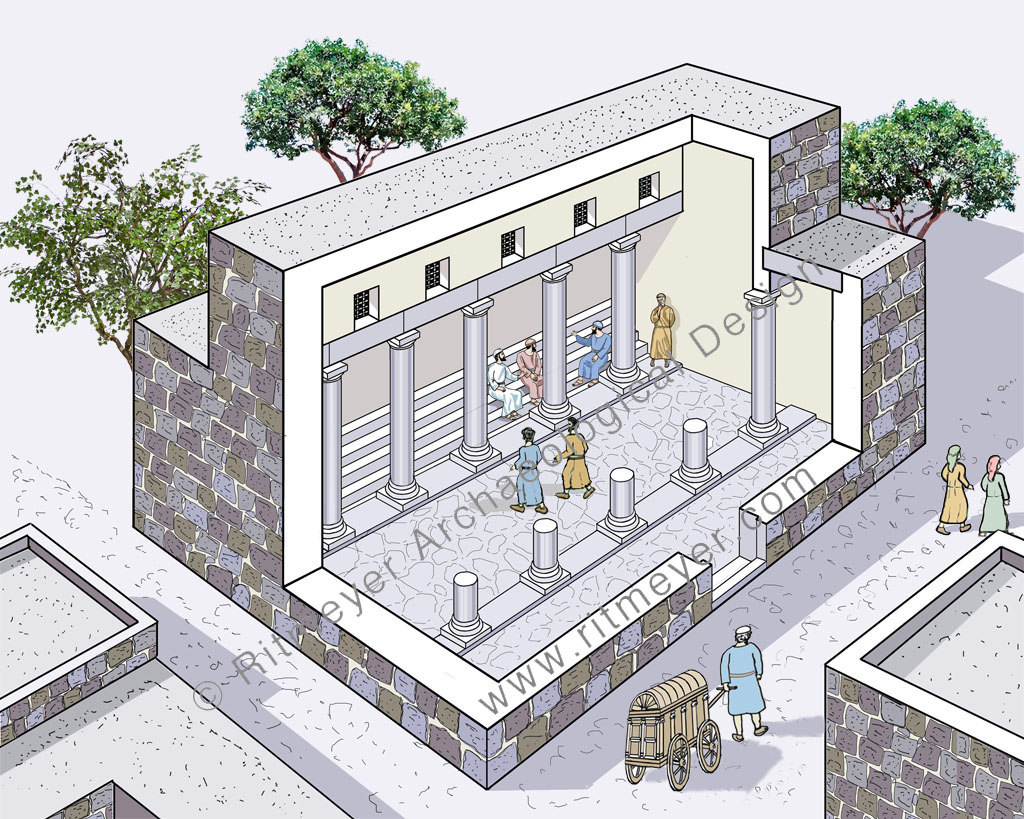 The best compliment I can receive about any of my reconstruction drawings is for the viewer to say: “It really makes the site come to life!” Unfortunately, the same cannot be said about photographs, however professionally taken. Take the site of Capernaum, perhaps the most visited site in the Galilee in any tour of the Land. Here, the place in which Jesus taught and in which he cast out an unclean spirit (Mark 1.21-28, Luke 4.31,32) is shown. It is all too easy to shoot photos of your group with the impressive synagogue structure emphasizing the magnificence of its architectural decoration and the dazzling white limestone from which it is built.

But this then is the image you take away with you and the picture that springs to mind when next you read Jesus’ reference to the centurion: “he loves our nation and has built us a synagogue” (Luke 7.5).

But look more closely beneath the ruins of the beautiful white synagogue and you will see that it rests on an older building made of dark stones.

What is the relevance of these? This is where the value of making reconstruction drawings can be shown, with the process allowing historical and archaeological information about the site to be presented in a meaningful way.

When Jesus moved to Capernaum after he was rejected in Nazareth, he brought hope to a part of God’s Land that was in desperate need of it. The dark basalt stones around the Sea of Galilee that were usually used in building were a tangible expression of the darkness felt by: “The land of Zebulon and the land of Naphthali, by the way of the sea, beyond Jordan, Galilee of the Gentiles,” under constant threat of invasion. Jesus’ arrival in the city was a fulfillment of the prophecy of Isaiah: “The people that walked in darkness saw great light; and to them which sat in the region and shadow of death light is sprung up” (Matt 4.15,16).

So, how do the structures made of limestone blocks and that made of basalt differ from each other? Edward Robinson was the first to identify the archaeological remains of Tell Hum, as Capernaum was known at the time, as a synagogue building in 1838.  The site of Capernaum was purchased by the Fransciscan Order in 1894. Gaudentius Orfali conducted excavations from 1921 to 1926 and concluded that the synagogue dated from the time of Jesus. Orfali also reconstructed parts of the synagogue, such as the back wall and the columns.

Digging deeper down in 1981, walls made of basalt stones and a basalt floor turned up 4 feet below the surface. These walls were located underneath the walls of the white synagogue and also under the stylobates (low walls that support a row of columns). It was initially thought that these walls were foundation walls, but when 1st century material was found on and below the basalt floor, it became evident that these basalt walls belonged to a synagogue of the 1st century, i.e, the synagogue in which Jesus taught.

Some of the trenches have been left open and the remains of this early synagogue can be seen today.

In the Byzantine period, the white synagogue would have stood out dramatically from the surrounding black basalt buildings, whereas in the 1st century, the Capernaum synagogue blended into its setting. In the foreground of the reconstruction drawing of the 1st century structure, a figure is depicted bringing the Torah scrolls into the synagogue in a chest on wheels. This detail will be the subject of a forthcoming blog post.

10 thoughts on “The Synagogue of Capernaum in which Jesus taught”