The interior of the Golden Gate in the 1970’s 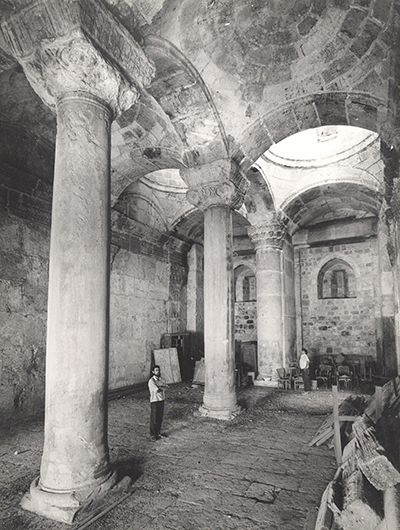 The Golden Gate is very much in the news today, as it has become a point of conflict between Jews and Muslims, or Palestinians and Israelis.

But what do we know about this gate?

The Golden Gate, around which swirl various traditions, is the most intriguing of all the gates of the Temple Mount. In Jewish tradition, it is through this gate (Sha’ar haRachamim—Gate of Mercy), blocked since the ninth century, that Messiah will enter at the end of days, led in by the prophet Elijah. This is based on the prophecy of Ezekiel 44.1–3. Christians believe that Christ made his triumphal entry into Jerusalem (recorded in all four of the gospels) through this gate on the Sunday before his crucifixion (Palm Sunday). By riding on a donkey, he fulfilled the messianic prophecy recorded in Zechariah 9.9. Muslims refer to it as the Gate of Eternity (Bab-al-Dahariyeh) and believe it will be an important part of the last judgment of mankind. The Muslim cemetery along the Eastern Wall is thought to have been placed there in the belief that the forerunner of Messiah, Elijah, being of a priestly family, could not pass through the Golden Gate, thus preventing the coming of the Messiah.

Some claim that the Golden Gate was built by the Byzantine emperor Heraclius after the expulsion of the Sassanians from Jerusalem. However, the absence in the architectural decorations of any Christian symbols, such as a cross makes that difficult to believe. There are actually four distinct historical phases represented in the architecture of this gate: Turkish, Umayyad, Herodian and First Temple period. In the 1970’s I was privileged to spend one week inside this gate, measuring and recording its plan and drawing accurate elevations of all the interior surfaces.

The Golden Gate’s outer façade is composed of two blocked-up gateways adorned with intricately carved relief arches. The decoration of the arches to the front and back of the gate are identical to the applied arches of the Double Gate which date from the Early Islamic period. The gate appears therefore to have been rebuilt in the Umayyad period, on the foundations of an earlier gate.

The remains of two massive monolithic gateposts are preserved inside this gate.

The gateposts are set in the same line as the Eastern Wall of the Temple Mount and line up with the massive masonry that can be seen on either side of the Golden Gate.

The gateposts and the two masonry sections appear therefore to be part of the same construction. The top of the southern gatepost is level with the top of the ancient masonry that can be seen south of the Golden Gate. The northern gatepost is one stone course higher and is located only one stone course below the surface of the Temple Mount. This means that the top of the original lintel would have been identical with the present-day level of the Temple Mount. The two gateposts belong to a gate that dates from the First Temple period and is most likely the Shushan Gate, mentioned in Mishnah Middot 1.3 as the only gate in the Eastern Wall.

The gate most probably was given this name by builders who had returned from exile in Babylon and for whom the Palace of Shushan lived on in their memories. However, if so there would have been a tradition of an eastern gate in this location from the time of the construction of the original Eastern Wall. It seems reasonable to suggest that the central section of the Eastern Wall dates from the First Temple period, in particular to the time of King Hezekiah. This square mount was extended south in the Hasmonean period, while both the southern and northern additions were made by King Herod the Great.

In 1969, the remains of an underground arch were discovered inside a grave in front of the Golden Gate. It was suggested that this may have been a pre-Herodian gateway. However, as the arch stones appear to be Herodian, it is more reasonable to suggest that this arch was part of a Herodian staircase leading up to the original gate. It is fascinating to contemplate that the stairway may still be intact under this gate, although hidden from sight by the Muslim Cemetery.

We do know that the remains of an ancient city wall lie under the present-day path that runs through the Muslim cemetery, which was discovered by Warren in the 1860s. The above-mentioned arched stairway led down through a gate in this city wall, the so-called Miphkad (Muster, or Inspection) Gate mentioned in Nehemiah 3.31, apparently still in use in the Second Temple period. During the latter period, it was through these gates that the Red Heifer was led out from the Temple Mount to the Mount of Olives (Mishnah, Parah). On the Day of Atonement, the scapegoat was led by the same route into the wilderness (Mishnah, Yoma).

It is therefore obvious that the Golden Gate is a very important historical building for the Jewish people, as reported by Arnon Segal of the Hebrew newspaper Makor Rishon Here is a translation of the article that refers to my research: