A reconstruction of the synagogue’s interior 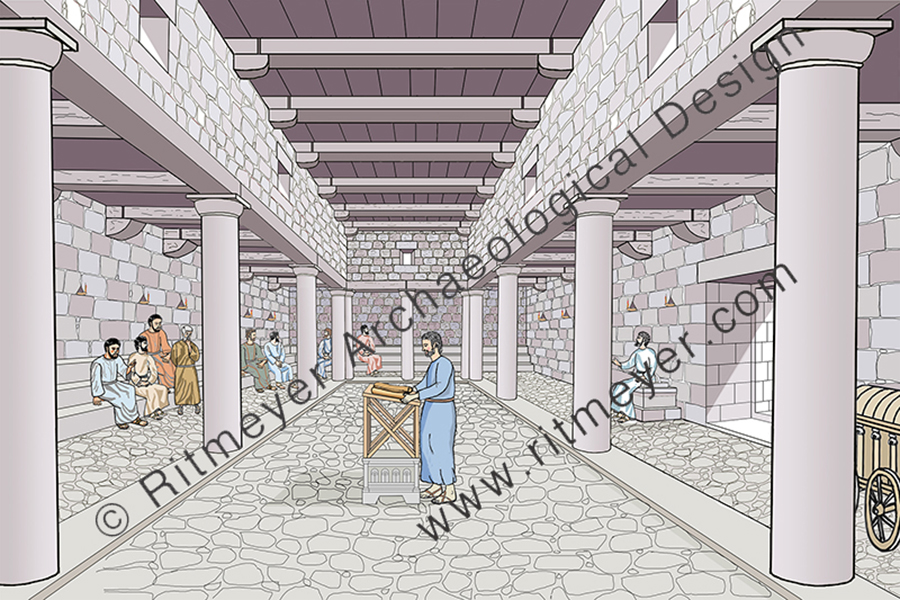 Apart from the first century Synagogue of Capernaum, the only other known synagogues from this period were found at Masada, Herodium, Gamla and Magdala. In Jerusalem, the  Theodotus Synagogue inscription, dating from the same time, was found, but no remains of the actual synagogue have been found.

The Law of Moses was first read, and then expounded on from Moses’ Seat, for in Acts 15:21, it says “For Moses has had throughout many generations those who preach him in every city, being read in the synagogues every Sabbath”.  And in Matt. 23:2,3 Jesus said, “The scribes and the Pharisees sit in Moses’ seat. Therefore whatever they tell you to observe, that observe and do, but do not do according to their works; for they say, and do not do”.

We have tried to put this information in a new reconstruction drawing of the interior of the Capernaum Synagogue. Opposite the entrance in the east wall, we see people sitting on stone benches, placed along three sides of the room.

In the centre of the hall is a reading platform, consisting of a decorated square stone on which a wooden lectern stands. This reconstruction is based on a similar stone that was found in the nearby synagogue of Magdala.

The order of the traditional Christian service is based on this Jewish one.

Apart from teaching in the synagogue, Jesus also performed miracles there, such as the healing of the man was there whose right hand was withered (Luke 6:6 – 10, Matthew 12:9 – 13, Mark 3:1 – 5), the man with an unclean (demonic) spirit (Mark 1:21-25), and perhaps also the woman who had a spirit of infirmity eighteen years, and was bent over and could in no way raise herself up (Luke 13:11-14). Jesus did these signs, not only to prove that he was the promised Messiah, but also to show the deeper significance of the Sabbath day as an example of the promised Sabbath rest for the people of God (Heb. 4:8-10).