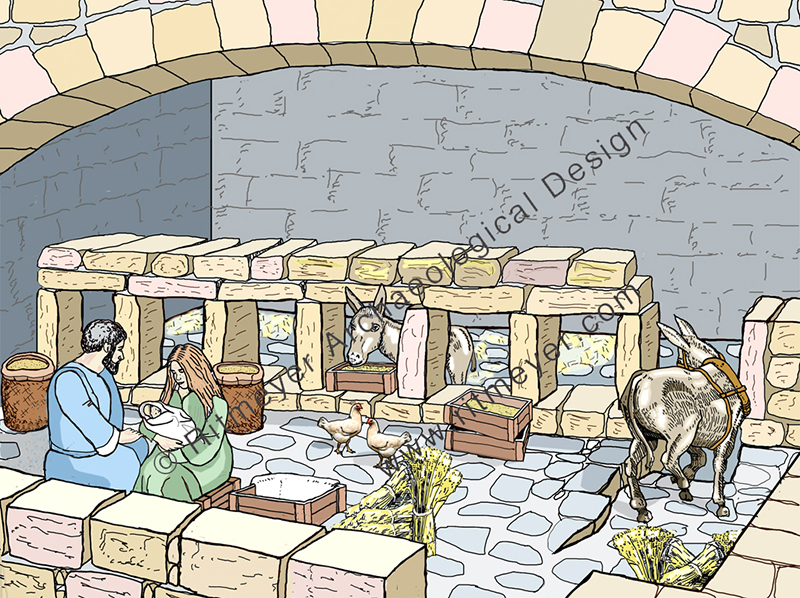 Many tourists visit Bethlehem, specially at this time of the year (except in 2020 because of the pandemic), as that is where Jesus was born (Luke 2:11). We first learn about Bethlehem in the Book of Ruth, where we read that Boaz purchased Ruth the Moabitess according to the law of the levirate marriage, who then became his wife (Ruth 4:10). They had a son called Obed, who became the grandfather of David. Jesus is, of course, the greater son of King David. What do we know about his birthplace?

Both Mary and Joseph were descendants of King David. When the Roman government ordered a census to be carried out, they had to travel from Nazareth to Joseph’s ancestral home in Bethlehem, because he was of the house and lineage of David. Mary was descended from David through Solomon (Matth 1:16) and Joseph through another son of David, namely Nathan (Luke 3:31). We suggest that the place where Jesus was born was not a randomly chosen cave, but a place that was prepared centuries earlier for this purpose.

Most people believe that the grotto in the Church of the Nativity in Bethlehem is the place where Jesus was born. In the early Byzantine period, a church was erected over this grotto by Constantine. After this building was destroyed in 529 CE, Justinian built a new church. In the floor of the Grotto of the Nativity is a silver star that indicates the traditional birth place of Jesus. It is important to remember, that after Jesus was born, he was laid in a manger (Luke 2:7). Mangers are found in stable blocks and not in caves or grottoes. The grotto in Bethlehem was originally a Roman shrine above which stood a temple to Adonis, the lover of Aphrodite.

What do we know about the ancestral home of the family of David? Near the end of King David’s life, he had to flee from his son Absalom. He stayed with Barzillai, the Gileadite, whose son Chimham returned with David to Jerusalem (2 Sam 19:37-40). In order to provide Chimham with a source of income, David apparently gave him a part of his own inheritance in Bethlehem on which to build a house, which is later mentioned in Jer. 41:17, as the habitation of Chimham.

Joseph would naturally have gone to this home where this family members lived. In the Gospel record (Luke 2:7), we read that there was no room for Mary and Joseph in the inn. The for word “inn” is kataluma in Greek, and means an upper room or guest room. When Joseph and Mary arrived at their ancestral home, they were told that all the upper rooms were occupied and the only available space left for Jesus to be born was the stable block. Joseph and Mary had to share this stable with animals. It wasn’t a romantic Christmas postcard stable with smiling camels and donkeys, probably drawn by artists who don’t know how bad camels can smell and how loud the braying of donkeys can be!

What actually did a stable look like in the time of Christ? From archaeology we know that stables looked like large rooms with a fenestrated wall, i.e. a wall with several low windows, built in the middle of the room. Animals were placed behind this wall and fodder was put in wooden boxes or baskets, called mangers, and placed in these windows. Sacks of provender were stored in the first half of the room. It was probably in this part of the stable that Mary and Joseph were allowed to stay and where Jesus was born and eventually placed in one of the wooden provender boxes, which would have served as his crib.

If that is so, then one can only marvel at God’s providence that a birthplace was prepared by David, so that Jesus could be born in his own inheritance a thousand years later.

When Jesus was born, shepherds came to pay their respect, in fulfilment of Micha 4:8 that the former dominion will be restored to “the watchtower of the flock” (Migdal Eder in Hebrew). This Migdal Eder is the place where Rachel was buried (Gen. 35:21). At the time when Jesus was born, Migdal Eder was the place where special shepherds kept the flock from which the sacrificial animals for the daily sacrifice in the Jerusalem Temple were chosen. Angels from heaven announced to these special shepherds the good tidings of the Kingdom of God.