Did Jesus preach in this synagogue? 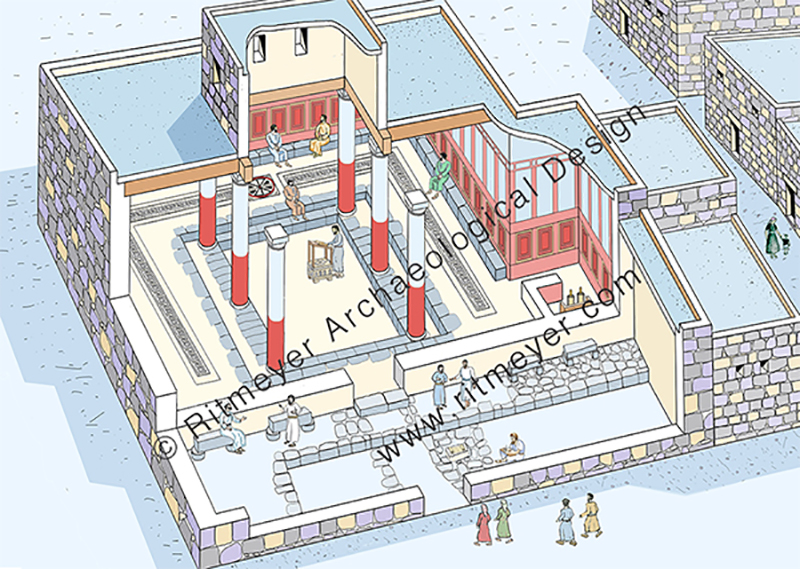 After Jesus moved to Capernaum, he made it a base for his preaching activities. The Gospels tell us that “Jesus went about all Galilee, teaching in their synagogues” (Matthew 4:23). He would go into the synagogues on sabbath days, as it was here that the people came together to worship. Although the Gospels don’t mention any particular synagogue where Jesus may have preached, archaeology has revealed the remains of a few Galilean synagogues that existed in the first century, namely in Capernaum, Magdala and Gamla. These synagogues were built of local basalt stones and this is reflected in our reconstruction drawings. A synagogue in Nazareth is mentioned in the Gospels, but no remains have been discovered so far. We have posted before on the Synagogue at Capernaum.

All three synagogues had a large meeting room with benches built around the walls. Some synagogues, such as that in Gamla, had a ritual bath, (called a mikveh in Hebrew), for ritual bathing nearby. This synagogue had a study hall attached to the building, as did the one discovered in Magdala.

The Gospels tell us that the Law of Moses was read every sabbath in the synagogue: ” For Moses has had throughout many generations those who preach him in every city, being read in the synagogues every Sabbath” (Acts 15:21). The public preaching in the synagogue was usually done from a chair called “Moses’ Seat”, as mentioned in Matthew 23:2. When Jesus spoke in the synagogue of Nazareth, after having read from the prophet Isaiah, he rolled up the scroll, gave it back to the attendant, and sat down.” Two such “Moses’ Seats” have been excavated, one in Chorazin and the oher in Hammath-Tiberias. These two latter synagogues were from the later Byzantine period, but it is possible that similar seats were used in the first century too.

In 2009, a first century synagogue was uncovered in Magdala during a salvage dig in preparation for the building of a new hotel in the Franciscan Church compound. The synagogue features a large reading room and a smaller study room in front of it. The entrance was from the west. A large stone in the study room was found to have two grooves near the sides and may have been used to place a scroll for reading or copying.

The synagogue room has a raised corridor with a bench running along the wall. A central rosette with flanking meander patterns made of mosaic decorated the floor. The walls were decorated with fresco patterns in dark red panels inside a mustard-coloured frame. The roof was supported by six columns that had red coloured fresco still clinging to some of them. Near the centre of the room, a rectangular stone with four feet was discovered. This stone, that apparently served as a support for a reading platform or lectern, was decorated with a relief of a seven-branched menorah, flanked on either side by amphorae and columns. These decorations are reminiscent of the Jerusalem Temple.

Magdala is the city where Mary Magdalene came from. It was a large city and recently another synagogue was discovered there. It is not recorded that Jesus preached in a synagogue at Magdala. However, as he usually went to synagogues to preach, it is highly likely that he did and would have met many people there, including Pharisees. One of those Pharisees had invited Jesus to his home to have a meal with him (Luke 7:36). That is where Mary Magdalene approached Jesus and was healed by him. She became an ardent follower of Jesus, was present at the crucifixion and was the first woman to whom Jesus appeared to after his resurrection.