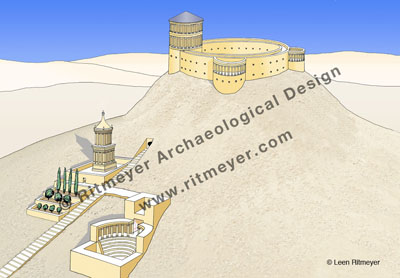 This mountain Fortress-Palace was built by Herod the Great as a place for refuge and burial in the Judean Desert, not far from Bethlehem. The circular building on top of the artificial mount was seven stories high and had many rooms inside the double-walled structure. Four defensive towers were built along the outer wall. Herod’s tomb was discovered in 2007, next to a large stairway that gave access to the Upper Palace. On the other side, the remains of a theater was found.
Herod was king at the time when Jesus was born (Matthew 2.1; Luke 3.1).