A new book on the Temple Mount was published today in Jerusalem. It has been widely reported, for example here, here, here and elsewhere. Various Jewish, Muslim and Christian authors discuss the meaning of the Temple Mount, called in this book the “Sacred Esplanade”. The book is a collection of essays by renowned scholars on the history, archaeology, aesthetics and politics of the place that Jews revere as the location of their two ancient temples, and that now houses the Al Aksa Mosque, the third holiest site in Islam. The aim was to “to try to dispel insensitivity born of ignorance.” 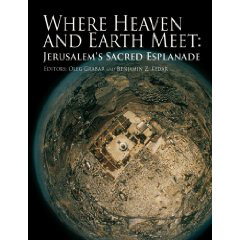 According to Miriam Feinberg Vamosh this aim was not achieved: “Despite their best efforts to produce an ecumenical book, the editors of this beautiful volume on the Temple Mount could not induce their Jewish, Christian and Muslim authors to agree on a single narrative, a fact that only confirms the complex and deeply held variety of traditions associated with the site.”

The wanton ignorance of archaeological evidence of the ancient temples, despite the many discoveries which prove that a Jewish Temple once graced the Temple Mount, has sadly led many Palestinians to deny any real Jewish attachment or claim to the plateau.

Nevertheless, I look forward to reading this book.