In connection to my previous post, I was interested to see that The Jerusalem Post also reported on the planned underground tunnel and parking lot in the Old City. I’m sure that Jerusalem archaeologists will be pleased with the prospect of excavating this area of the Jewish Quarter.

The architect Sherki admitted that it:

would be impossible not to lose some archeology in the course of construction, and said it took many years for the Israel Antiquities Authority to agree with the plan because of the potential archeological losses. But he believes that because they have a good idea of what exists underneath, the construction will minimize the destruction of archeological ruins.
At its deepest point, if no significant archeological discoveries are made, the parking garage will reach a depth of about nine meters, allowing for four levels of parking. But with as little as five meters, a depth Sherki is certain they can reach without disturbing any ruins, they can have a double-tiered parking garage.

Sherki may be disappointed, as from my experience of working on the Jewish Quarter excavations, I know that the Byzantine remains are only 3-4 m deep. They have been excavated by the team of the late Prof. Nahman Avigad and the results have been documented and published.

I could not help but be intrigued at the thought of what could be found, should the excavations go ahead. Depending how large an area will be opened, more of the entrance and narthex of the Byzantine Nea Church may be found and perhaps some of the internal architecture. 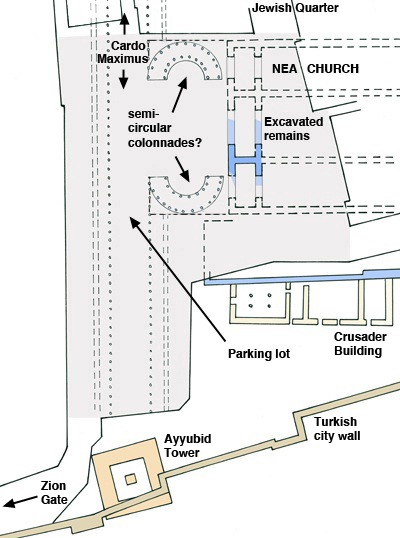 Remains of the Cardo Maximus may also be found. A large stretch of this street was already excavated during the 1980’s and I was privileged to supervise its reconstruction. The southern continuation, however, runs through the western part of the parking lot area.

Procopius (500 – 565 AD), a prominent scholar who lived in Caesarea, wrote a detailed description of the Nea Church. According to his description, “as one advances there are two semi-circles (hemikykla) which stand facing each other on one side of the road that leads to the church”.
The street must be the Cardo Maximus and the two semi-circular colonnades stood between the Cardo and the Nea. Procopius does not supply us with any further information but I have suggested a possible arrangement on the accompanying plan. This differs from the plan of other Byzantine churches, which usually have a rectangular or square atrium in front of them. St. Peter’s Church in Rome (although dating from a much later period) also has two semi-circular colonnades in front of it.
In Jerusalem there is no space for anything as grand as in Rome, but nevertheless I hope that some light may be shed on Procopius’ description of the Nea Church, in particular on these semi-circular structures. The Byzantine historian did write that Justinian’s Nea Church was “a shrine with which no other can be compared.”