The Friends of the Israel Antiquities Authority report the following:

For those of you who will be in Israel on Tuesday, June 21st, 2011, please join us at the festive opening ceremony for the First Temple Period Archaeological Site recently excavated, conserved and made accessible to visitors in the Jerusalem Archaeological Park.

This fabulous project, near the southern wall of the Temple Mount enclosure, is made possible through the exemplary generosity of Daniel Mintz and Meredith Berkman.

The announcement is accompanied by this video:

The site was first excavated in the 1970’s under the direction of the late Prof. Benjamin Mazar and in the 1980’s and onward, Eilat Mazar has further excavated the site. The site has remains from the Israelite, Herodian (dismantled), Roman, Byzantine and Ummayad periods. 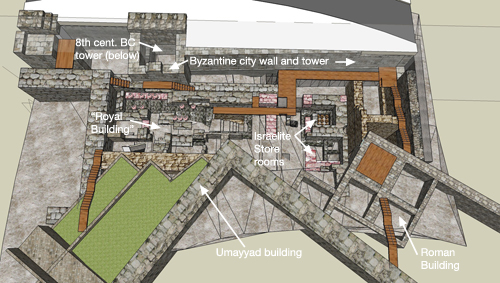 The plan shows the walkways (brown) to be used by visitors, once the site is open.