The next drawing in our series on the development of Mount Moriah shows the Temple Mount in the Hasmonean period (see below). However, we will first describe some preliminary stages in its expansion, which took place during the Hellenistic period. The Bible, apart from the book of Daniel, is virtually silent about the inter-testamental period. However, the works of Josephus and the Apocryphal books of Ecclesiasticus and the two Books of the Maccabees provide much information.

Josephus records in Ant.11.325–339 a visit to the Temple by Alexander the Great after his capture of Gaza in 332 BC. Here, the Jewish historian has him sacrificing in the Temple under the guidance of the High Priest.

Although this may be mere legend, the story points to the perpetuation of the Temple services following their revival after the return from exile in Babylon. After the death of Alexander, Judea was governed by the Ptolemies of Egypt, who were tolerant of Jewish religious practice.

Around the end of the third century BC, restoration work was carried out on the Temple Mount by the High Priest Simon, son of Onias. According to the apocryphal work of Ben Sira called Ecclesiasticus (50.1–3), the work is described as follows:

It was the High Priest Simon son of Onias who repaired the Temple during his lifetime and in his day fortified the sanctuary. He laid the foundations of the double height, the high buttresses of the Temple precincts. In his day the water cistern was excavated, a reservoir as huge as the sea.

It is clear from the text that the bulk of these works consisted of  the repair and strengthening of the temple and other existing structures. In the reconstruction drawing of the Temple Mount below we have shown the buttresses that were added to stabilise the Temple.

Control of the city of Jerusalem was won from the Ptolemies by the Greek Seleucids from Syria in around 200 BC . The Seleucid dynasty was determined to force the Jews to accept Hellenism. It was the sacrifice of a pig on the Temple altar by the Seleucid ruler Antiochus IV Epiphanes, mentioned in Daniel 11.29-31, that sparked off the revolt by the Maccabee brothers. Their bloodline evolved into the Hasmonean dynasty that established an independent Jewish state lasting from 164 to 63 BC.

The consecration of the Temple in 164 BC is still celebrated today by the Jewish feast of Hanukkah.

In 141 BC, Simon the Maccabee demolished the hated Akra, a fortress that the Seleucids had built to the south of the Temple Mount so that a Macedonian garrison could control the Jewish population.

Simon then leveled the mountain on which it was built and incorporated the whole area into the Temple Mount complex:

After this extension to the south, the Temple was no longer square in shape and the original Mount Moriah was now almost completely built over. The Hasmonean southeast corner can be seen in the Eastern Wall of the Temple Mount at the so-called seam. 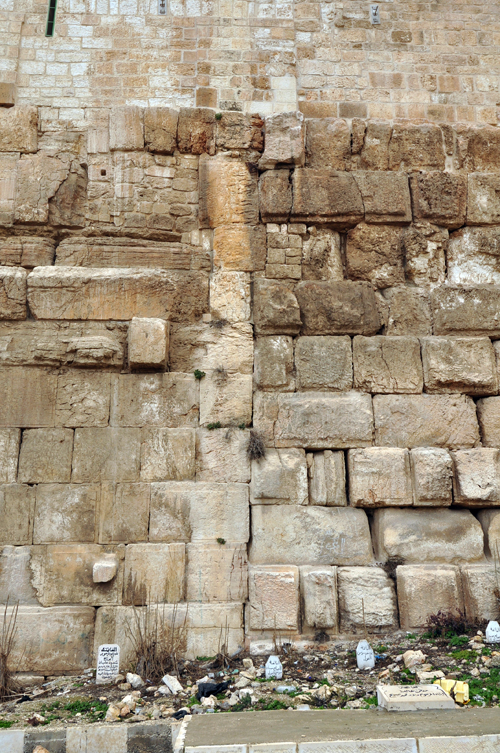 The “seam” near the southern end of the Eastern Wall. To the left of the seam is Herodian masonry, and to the right, Hasmonean.

This drawing is the 6th in this series. For the previous drawings see: Mount Moriah, Jebusites, Solomon, Hezekiah and Nehemiah.