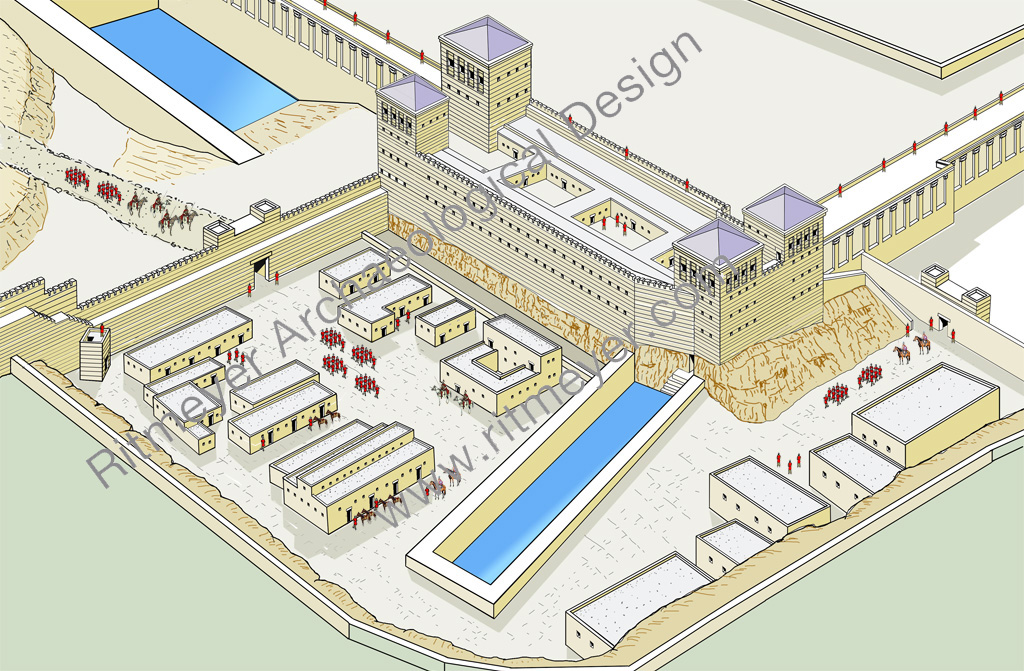 Josephus wrote (War 5.238-246) that the Antonia Fortress was built on a rock that was 50 cubits (86 feet or 26.25m) high. The fortress had towers at its four corners. Its interior had apartments, cloisters, baths and courtyards, and looked like a palace.

Anyone who has seen a section of the Herodian Temple Mount knows that it could never be said that Temple Mount stood on such a rock. In fact, the platform swallows up Mount Moriah beneath it.

Another problem that is raised is that the accepted location of the Antonia Fortress is thought to be too restricted an area. What do the historical sources have to say about this? In War 5:244 Josephus mentioned that:

“a Roman cohort was permanently quartered there, and at the festivals took up positions in arms around the porticoes to watch the people and repress any insurrectionary movement.”

How to understand this statement? Although the rock plateau on which the fortress stood is a sizeable piece of real estate, measuring approximately 148 feet (45 m) from north to south and 394 feet (120 m) from east to west, it is indeed difficult to imagine that a cohort of about 500 soldiers and their horses could have camped inside this fortress

However, I believe that it would be a mistake to limit the boundaries of the Antonia to the rocky plateau only. The Strouthion Pool, for example, would have provided water for the Roman soldiers garrisoned here and would have been protected. At a distance of about 60m to the north is a high rock scarp that enclosed a large area where later the eastern Roman Forum was built. It is reasonable to suggest that the common soldiers camped out here in semi-permanent barracks, while the officers and commanders stayed in more luxurious and permanent accommodation on top of the Antonia rockscarp.

Another difficulty in suggesting that the Temple Mount was the Antonia, is what Josephus writes about its destruction by the Romans:

“Titus now ordered the troops that were with him to raze the foundations of Antonia and to prepare an easy ascent [into the Temple Mount] for the whole army” (War 6. 93).

“Meanwhile the rest of the Roman army, having in seven days overthrown the foundations of Antonia, had prepared a broad ascent to the Temple” (War 6.149).

The Temple Mount retaining walls are still standing today to a certain height and therefore could never have belonged to the Antonia. It also would have been impossible to destroy the Temple Mount down to its foundations in merely seven days.

The proposed reconstruction of the Antonia, with its adjacent area where the cohort could have been stationed, would be in harmony with the New Testament account of Paul’s arrest. In Acts 21 and 22 the Apostle is recorded as having been brought up from the Temple Mount by stairs into the “castle”, which could have been nothing other than the Antonia Fortress itself, as he was allowed to address the Jewish people that were standing below on the Temple Mount.

In Acts 21 and 22 the Apostle Paul was brought into the “barracks”, which was the Antonia Fortress itself, for he was allowed to address the Jewish people that were standing below on the Temple Mount.

In Ch. 23 we read that, in order to save Paul’s life, the tribune ordered two centurions to “Get ready two hundred soldiers, with seventy horsemen and two hundred spearmen to go as far as Caesarea at the third hour of the night.” This would have amounted to two-thirds of the cohort that was stationed in the grounds of the Antonia.

So, the historical sources and the archaeological evidence combine to show that the Antonia Fortress stood at the northwest corner of the present-day Temple Mount and that this Temple Mount is indeed the one built by King Herod the Great.

36 thoughts on “The Antonia Fortress”