A model of the Second Temple has been placed on the roof top of the Aish haTorah Yeshiva building overlooking the Temple Mount. It appears to have been modeled on the Holyland model of the Second Temple, built in the 1960’s. This latter model was built at a scale of 1:50, so the new model with its scale of 1:60 is slightly larger. This report includes a video showing how the 1.2 tonne model was lifted into its place.

The most dramatic aspect of the model is its location, just 300 yards from where the original Temple stood. Paradoxically, this has turned out to be a drawback, as, in order to allow ease of access, the model Temple faces west instead of east. Although this is hugely disorienting, the model with its hydraulic system, which allows the interior of the Holy of Holies to be seen, provides another rich experience for lovers of Jerusalem. 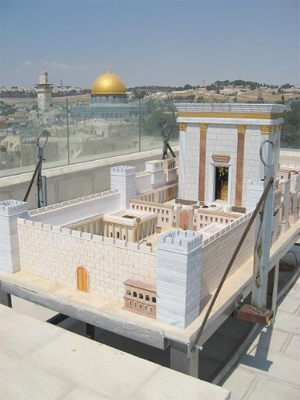 One thought on “New Model of the Second Temple in Jerusalem”