My wife Kathleen and I enjoyed our time last week in New Orleans and even had time to sail on the Mississippi on the Steamboat Natchez. It was also interesting to listen to the many stories about the Katrina disaster four years ago. People’s lives are still dominated by that event. Their recent history seems to be divided in pre- and post-Katrina periods. The New Orleans Baptist Theological Seminary, where I lectured for two days as the Manuel Lectureship Speaker, is only now getting back to normal, after having had to move to Atlanta, as most of the campus was flooded. 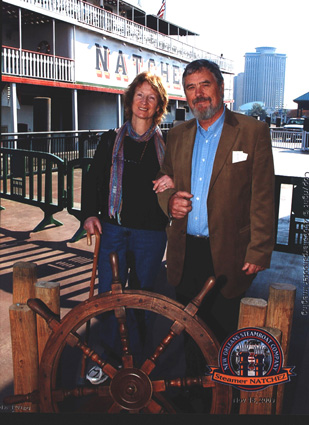 There were many lectures to choose from at the ASOR, ETS, SBL and NEAS conferences. We attended lectures, ranging from Satellite Remote Sensing, the Location of Sodom, through the latest updates of recent archaeological excavations, such as Kh. Qeiyafa and Tell Es-Safi/Gath, to a fascinating section on Teaching Archaeology.

The latter section was at times hilarious, listening to archaeologists who had to teach archaeology, without having had any prior teacher training, to students who didn’t know anything about the subject at all. Reading assignments sometimes produced gems like the title of Eric Cline’s lecture: “The Israelites Wondered in the Dessert for 40 years” and “Before the Printing Press, it took 300 Sheep to Write the Bible”.

Here is a comment on my lecture on “The Eastern Wall of the Temple Mount in Jerusalem – Deciphering Its Story”.