In 1994 my archaeologist-wife Kathleen and I wrote an article in Biblical Archaeology Review (Nov/Dec 1994) called “Akeldama – Potter’s Field or Priestly Cemetery?” Akaldama is mentioned in the Bible as a burial place for strangers, bought with the money given to Judas to betray Jesus (Acts 1.19). Akeldama means Field of Blood, for Judas, while trying to hang himself, fell down and his body burst open.

We then suggested that a small, but beautifully decorated tomb in the area below St. Onuphrius Monastery might have belonged to Annas the High Priest, who condemned Jesus to death, for the Temple Mount could be viewed from this tomb and the architectural decoration of the tomb has been copied from the Temple Mount. There are other decorated tombs in this area. Instead of a burial place for strangers, this area was most likely the cemetery of priestly families. 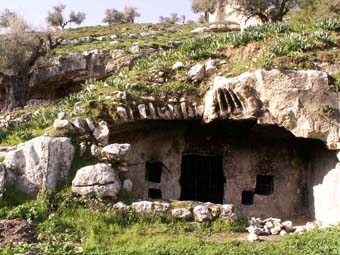 Entrance to the Tomb of Annas the High Priest 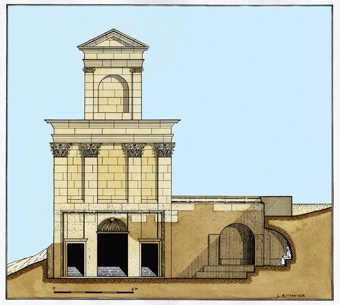 Reconstruction of the Tomb of Annas (© Ritmeyer Archaeological Design)

In June 2000, another tomb was accidentally found, which contained bones and remains of a linen shroud. The tomb is located next to the tomb which we had identified as Tomb of Annas. Carbon-14 dating showed that the shroud dated from the first half of the first century AD. It has been reported that a new analysis has now showed that the man to whom the shroud belonged suffered from leprosy. Leprosy is mentioned in the Bible, but this is the first time that archaeological evidence has proved that it actually existed. Joe Lauer pointed me to an article in the Daily Mail, which has several photographs of the tomb.

It is interesting to note that this shroud doesn’t look at all like the Turin Shroud. The shroud in Jerusalem was made up of several wrappings and there was a separate wrapping for the head. This would, of course, be in harmony with the burial of Jesus, whose body was buried with a separate head cloth (John 20.27).

5 thoughts on “Leprosy in Jerusalem”