The Temple of Jerusalem: From Moses to the Messiah: Studies in Honor of Professor Louis H. Feldman (Brill Reference Library of Judaism) [Hardcover] 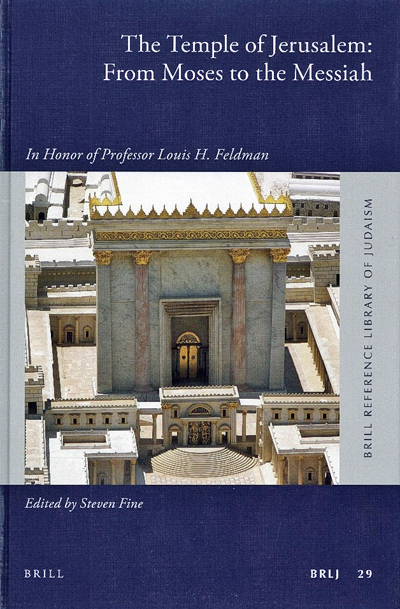 On the weekend of May 11 – 12, 2008, I attended a conference at the Yeshiva University, New York, on The Temple of Jerusalem: From Moses to the Messiah. This conference was in honour of Prof. Louis Feldman, who I knew as a contributing translator of the Loeb translation of Josephus, which I use constantly. In Yeshiva University, he is revered as a brilliant scholar and mentor of generations of students – he has taught there for the last 56 years.

This conference was the inaugural gathering of the university’s Center for Israel Studies , which: “nurtures excellence in interdisciplinary scholarship and the teaching of Israel throughout history and across disciplines, with a keen focus upon the longue durée and the modern state.” Professor Steven Fine, director of the centre, organised a stimulating Programme of Lectures around an exhibition of models of the Tabernacle, Solomon’s Temple, Herod’s Temple and Herod’s Temple Mount. I was commissioned to design these models by the late Ben Adelman of Silver Spring, M.D. Mr Adelman’s estate bequeathed the models to the Yeshiva University. You can read my blog where I record the highlights of the conference here.

Last Friday, the postman brought a new book for our shelf, the volume which documents the conference – a welcome addition to our Temple section! The publisher’s blurb is as follows:

“The Temple of Jerusalem: From Moses to the Messiah brings together an interdisciplinary and broad-ranging international community of scholars to discuss aspects of the history and continued life of the Jerusalem Temple in Western culture, from biblical times to the present.”

Subjects covered in the essays range from: The Tabernacle at Sinai to the Temple Scroll, my own essay on the process of model making, the Temple in late Medieval Spanish Altarpieces, and Archaeology and the Arab-Israeli conflict.

Of particular interest to me because of my background are the essays:

“See, I Have Called by the Renowned Name of Bezalel, Son of Uri …”: Josephus’ Portrayal of the Biblical “Architect” …      by Steven Fine, Yeshiva University

“Notes on the Virtual Reconstruction of the Herodian Period Temple and Courtyards” by Joshua Schwartz and Yehoshua Peleg, Bar-Ilan University

“Some Trends in Temple Studies from the Renaissance to the Enlightenment” by Matt Goldish, The Ohio State University (a masterful survey of this compelling subject)

“Jerusalem during the First and Second Temple Periods: Recent Excavations and Discoveries on and near the Temple Mount” by Ann Killebrew

Steven Fine is to be congratulated on the production of this most useful volume. The involvement of Yeshiva University students in the editing process and bringing the book to production is especially commendable.

2 thoughts on “Volume on The Temple in Jerusalem in honour of Prof. Louis Feldman now out”