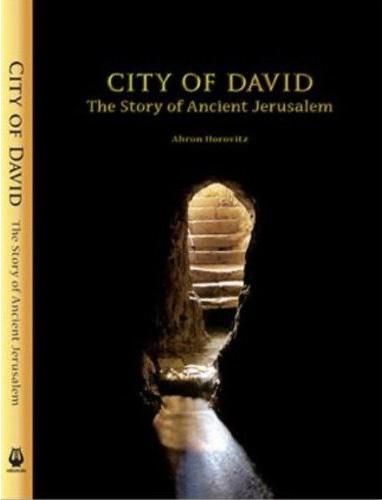 If you are considering requesting the book to be brought from Jerusalem, give a thought to your friend’s baggage allowance! The book is lavishly produced, quite large and very heavy. So heavy indeed  (about 6 pounds) that it was cheaper to bring it 160 miles by car from London to Cardiff, where we live, than to send it by Royal Mail!

The book recounts the Biblical story of Jerusalem and uses the results of archaeological excavations to illustrate it.

One of the best features of the book is Horovitz’s ability to provide clear, concise descriptions of the debates that surround interpretation of Jerusalem’s most controversial archaeological remains, such as Warren’s Shaft, the Stepped Stone Structure, and the city’s fortifications. Reconstruction drawings depicting how the city may have looked at various stages of Biblical history are based primarily on the interpretation of fellow tour guide Eyal Meiron, while explanations for some of the most controversial features of Jerusalem’s water supply systems are those offered by Zvi Abells, a retired electrical engineer who devotes all his spare time to studying Jerusalem’s water systems. These reconstructions and interpretations offer perspectives on issues of contentious debate rarely seen in print.

One thought on “City of David: The Story of Ancient Jerusalem”