Recently we returned from a trip to Australia – hence the absence of blogs – and I was excited to receive this long-awaited book in the post. 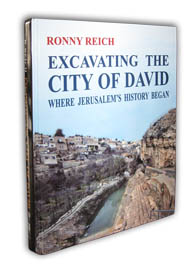 Ronny Reich has excavated in several locations in Jerusalem for over 40 years, starting in 1969 as surveyor on Prof. Nahman Avigad’s team in the Jewish Quarter (a position he held till 1978 when I took over this post, after he had left for the Israel Dept. of Antiquities and Museums) and in the City of David, together with his colleague Eli Shukron, since 1995.

The story of the early exploration begins with a description of the visit on April 17, 1838 by Edward Robinson to the Gihon Spring, the ever-flowing water source that determined the location of the City of David. This is followed by the account of Charles Warren’s daring walk through Hezekiah’s Tunnel, which Reich prefers to call the Siloam Tunnel. Reich then examines the explorations of many other excavators, such as Schick, Bliss and Dickie, Weill, Macalister and Duncan, Kenyon, Shiloh and others. Each investigator added a little to our understanding of the history of this site and Reich’s useful analysis of these findings makes it easier to fit them into an overall picture of the development of the City of David.

His own and Shukron’s explorations added much to our understanding of the waterworks in this location, especially how the different components, such as the Siloam Tunnel and the different channels worked together. His explanation of the construction of the Siloam Tunnel and how Channel I was used as a “spirit level” to make sure that the water of the Gihon Spring flowed smoothly to the Siloam Pool makes for exciting reading.

The excavations round the Gihon Spring revealed that the spring and its approach from the city were strongly fortified in the Jebusite period. Two massive walls created a safe approach to a Rock-cut Pool from which water could be drawn.

This book was written, according to Reich, “First and foremost … for lay readers who love the history of Jerusalem”. I found Reich’s discussion of the historical interpretations of the different finds honest and frank. He acknowledges, however, that he is a skeptic and minimalist where the Biblical text is concerned and has difficulty reconciling the text and the archaeological remains. He discusses these problems in a special boxed section called “Biblical traditions: David, Solomon and the United Monarchy”, which is well worth reading and may help in an accurate examination of the Biblical text.

The book is illustrated with many beautiful photographs, but I would like to have seen more interpretative drawings showing how certain features fit together. The text is easy to read, but a final edit should have weeded out mistakes in spelling and syntax.