As announced in a previous post, this coming Thursday the symposium on Jesus and the Temple will commence in Boca Raton. 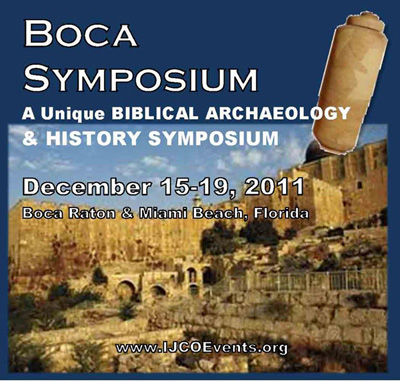 It will be my pleasant duty to give the opening lecture, entitled  “Imagining the Temple Early Jews Knew”. Here are details of the symposium.

I hope that my presentation will provide a fruitful focal point for collaborative work between those of other disciplines who are trying to understand the site.

I am also glad to say that we are not any longer in the realm of imagination. Apart from the historical sources (Josephus, the New Testament and the Mishnah), we have the results of the daring investigations of explorers of the 19th and 20th century. The massive excavations south and west of the Temple Mount, following the 6-Day War in 1967, provided information on the outer frame of the Temple platform. And in the absence of excavations on the mount itself, (none is foolhardy enough to attempt this, as it would start another Mid-East war!), research into surface traces preserved there has yielded results that add detail and complete the picture. Our depiction cannot be an exact reproduction of the structure that existed in Jerusalem in the time of Christ, but hopefully it approximates to what only an imaginary time tunnel could show.