The IAA has released a great free app to teach children about the archaeology of Israel. As parents who have always encouraged our children (now grown up and leading their own tours to Israel and the surrounding Bible Lands) to get involved in the fun of digging, we are excited about this development. The app is in English and is available for download at the iTunes Store for iPhones and iPads. An Android version will be made available soon.

The app features two simulated dig sites.  One is based on the site of a Roman period mosaic at Lod and the other on the site associated with the Dead Sea Scrolls at Qumran. These two sites were chosen as they are so well known. Most people have heard of the Dead Sea Scrolls and the beautiful mosaic that was found in Lod is making a world tour of leading museums in the U.S and in Europe. You can learn more about this mosaic at the Lod Mosaic website. 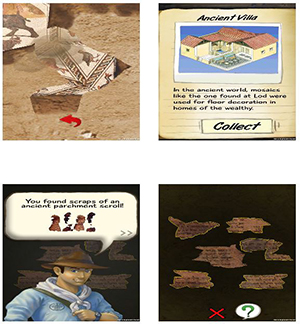 We are delighted that our reconstruction drawing of the Anaploga Villa in Corinth was used in this game:

The games were developed in collaboration with the IAA’s team of pre-eminent archaeologists and researchers. As they play, kids get a feel for what archaeologists do as they experience the excitement of discovery and the creativity and skills involved in solving mysteries from the distant past.

Players select between two dig sites – each has a unique game that puts the player in the driver’s seat and requires using different archaeological skills. At Lod, you clear the dirt to uncover an ancient Roman period mosaic and then play a fast-paced quiz-style game using your smarts and powers of observation to identify and classify the animals and objects on the mosaic.

In the Qumran caves, you discover fragments of the 2,000 year-old Dead Sea Scrolls that you piece together in a puzzle game. Then you scan the scrolls to reveal their text more clearly, mirroring the advanced spectral imaging process performed by the IAA team in the laboratories.

We look forward to seeing what other sites will eventually be added to the app!