The Israel Antiquities Authority announced today that a stepped podium/auction block has been found in the City of David.

An intriguing find consisting of an impressive pyramid-shaped staircase constructed of large ashlar stones was uncovered in an archaeological excavation currently conducted by the Israel Antiquities Authority. 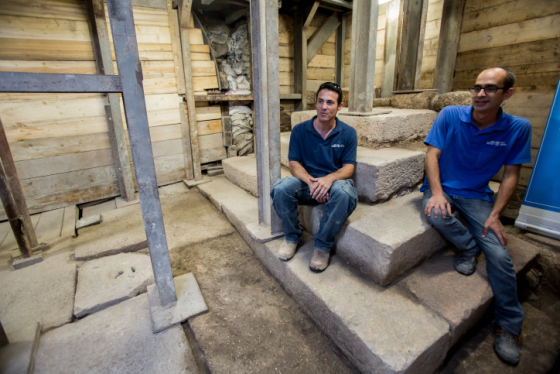 This stepped podium was situated on the east side of the Tyropoeon Valley Street in between the Siloam Pool and the Temple Mount:

This structure is situated alongside the 2,000 year old Second Temple stepped street, which carried pilgrims on their way from the Shiloah (Siloam) Pool to the Temple, which stood atop the Temple Mount.

According to archaeologists Nahshon Szanton and Dr. Joe Uziel, who direct of the excavation on behalf of the Israel Antiquities Authority, “The structure exposed is unique. To date such a structure has yet to be found along the street in the numerous excavations that have taken place in Jerusalem and to the best of our knowledge outside of it. For this reason, its exact use remains enigmatic. The structure is built along the street in a place that is clearly visible from afar by passers-by making their way to the Temple. We believe the structure was a kind of monumental podium that attracted the public’s attention when walking on the city’s main street. It would be very interesting to know what was said there 2,000 years ago. Were messages announced here on behalf of the government? Perhaps news or gossip, or admonitions and street preaching – unfortunately we do not know. Bliss and Dickie, two British archaeologists who discovered a small portion of this structure about 100 years ago, mistakenly thought these were steps that led into a house that was destroyed. They would certainly be excited if they could come back today and see it completely revealed”.

Bliss and Dickie were indeed the first archaeologists to find this structure while excavating the Tyropoeon Valley Street. They called this particular site M3:

“At M3 a fine flight of steps projects some 5 feet beyond the kern=b line. The steps are five in number and return around both angles. Hoping that it might lead to an interesting building, we pushed back, but only to find that the house to which it belonged was quite ruined, only a sort of cellar remaining.”(Bliss, F.J. and Dickie, A.C., Excavations at Jerusalem 1894-1897, pp. 141-2).

They published a plan and section of this area:

Lacking any parallels to such a structure, the modern excavators don’t know what this structure was used for. They suggested an auction block for slaves or a “Stone of Claims” where lost property was announced. On Thursday, the 3rd of September, the 16th Jerusalem Annual Conference will be held at the City of David Studies. It will be interesting to hear if any plausible explanation may be forthcoming.