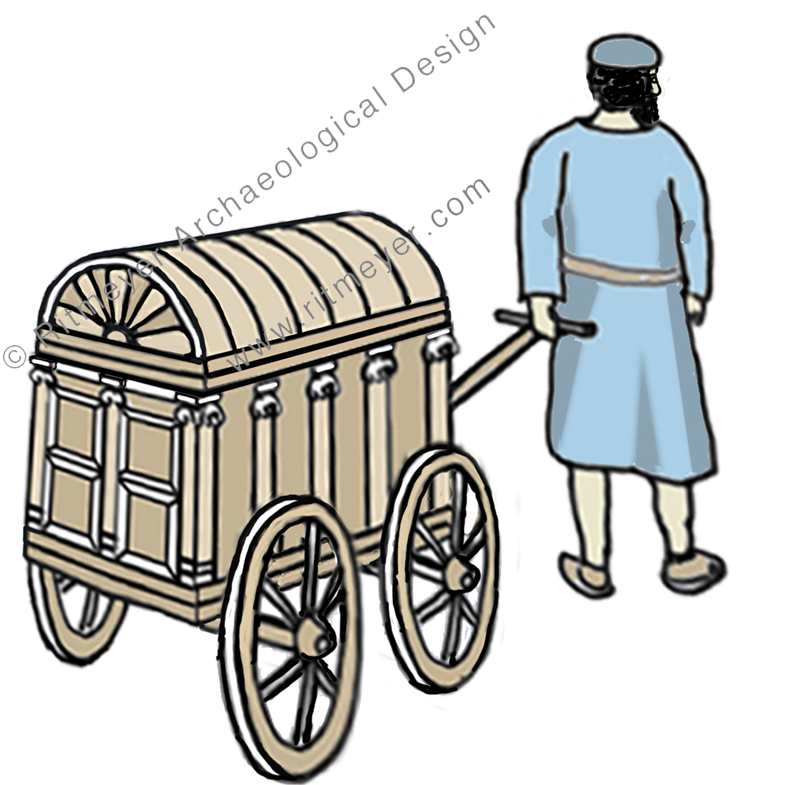 The reconstruction drawing that illustrated our previous post, which described the 1st century synagogue of Capernaum, includes a figure pulling a small ornate carriage towards the entrance of the building.

Is this vignette just an artistic flourish or does it have a historic basis? In this post, we hope to show that ancient sources and evidence from one of the architectural fragments found scattered on the site of Christ’s “own city” (Matthew 9.1), make it reasonable to assume that such a device was once used to transport the precious scrolls of the Law to the synagogue from a place where they were stored safely.

But firstly we must release the element (pictured below) from the layers of misidentification it has accrued since it was first displayed on a wall by the Franciscan custodians of the site, together with other elements of a frieze that originally adorned one of the walls of the later (Byzantine) synagogue.

I have lost track of the number of times, on visits to the site, that I have heard tour guides explain to their group: “this is a model of the Ark of the Covenant made by Moses and carried for 40 years in the wilderness.” A well-known tour company has a photo of this stone on their website with the caption “Stone carving of Ark of the Covenant at Capernaum” (now amended since this post) and this is repeated many times, for example by Tripadvisor.

An easy explanation – but could it be true? Opinions vary greatly, even among scholars. This is partly due to the lack of comparative material. There is one illustration from the Dura Europos Synagogue that shows the Ark on a wheeled cart, but that was the Ark of the Covenant as it was sent back on a cart by the Philistines (1 Samuel 6:7) and therefore cannot be used as a parallel:

There is an insight in the book “Capernaum” 1  by Sapir and Ne’eman (pp 63, 64) into the dichotomy between two religious requirements of the synagogue: “the first religious demand was – and still is – to focus the attention of the whole praying congregation on the Ark of the Law – (aron hakodesh) containing the scrolls of Torah. Another independent demand, no less imperative – was to orientate the synagogue toward Jerusalem” … “If the Ark were permanently built in the south wall or a little before it, the view towards Jerusalem would be blocked for ever. If, on the contrary, the Ark of the Law were arranged on the blind doorless north wall,the worshippers would have to turn their backs on Jerusalem -which was considered a blasphemy.”

A passage in Mishnah Taanit 2:1 may explain how a solution to this problem was found: “They used to bring out the Ark [containing the Scrolls] into the open space in the town”. Although this was done during times of fasting, it nevertheless shows that the Torah scrolls were sometimes transported from a place, such as the home of the archisunagogos, as the ruler of the synagogue is called in the New Testament, to the synagogue and back again.

On p. 72, Sapir and Ne’eman describe the “Carruca”or wheeled carriage depicted on the frieze from the Byzantine synagogue of Capernaum. On p. 79, they remark that although the subject is controversial,  that there is a school of thought that maintains that in the early synagogues there may have been no fixture for a Torah shrine whatsoever and that the Torah was rolled in within a receptacle or portable shrine such as the latter.

One may be surprised by the use of ornamentation such as we see on this carving, but such decoration abounds in the interim period between the destruction of the Second Temple in Jerusalem and the acceptance of the Talmud. Galilean Jewry found such decoration acceptable when stripped of its pagan significance. Certainty eludes us but putting the requirement for a means of transport for the scrolls of the Law to the synagogue together with the finding of the carving of the carruca would seem to provide illumination.

Certainly, it makes for a more satisfying interpretation of the carving because, as every tour guide worth their salt should know, the Biblical stipulation was that Ark of the Covenant was to be carried about on poles and not put on a wheeled cart (Exodus 25:14). Although the Byzantine synagogue most likely had a permanent cupboard  called the aron hakodesh,  as most of the other synagogues of that time had, the carving of the carruca may have expressed a memory of the 1stcentury when the scrolls were solemnly wheeled into the synagogue, as portrayed in our reconstruction drawing.