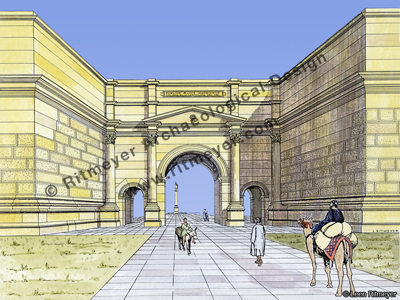 The Damascus Gate is located in the centre of the northern wall of the Old City of Jerusalem. The gate was built in the 2nd century AD during the reign of the Roman Emperor Hadrian as a monumental entrance to the city of Jerusalem, which he had renamed Aelia Capitiolina. This gate features on the Madaba Map, which shows an open square with a column inside the gate. Reconstruction: © Leen Ritmeyer