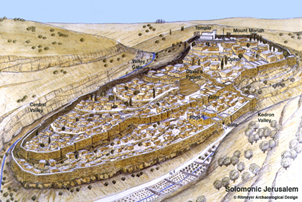 1. The City of Solomon drawing (above) was the first reconstruction to incorporate the massive fortifications that have been uncovered near the Gihon Spring. No wonder that this was the place where Solomon was anointed king. Another first in this drawing is the interpretation of the Spring Tower as part of an additional gateway to the city on the east, so that to get into the city from this direction, one had to pass through two gate systems.
2. The next drawing is more schematic, as it shows how Jerusalem developed in the Biblical period or Iron Age. It shows at bottom left the City of David as he had conquered it from the Jebusites and rebuilt it. On the right of the drawing one can see how Solomon, by building the first permanent sanctuary in Jerusalem, extended the city to the north, doubling its size.
The top part of the drawing shows Hezekiah’s expansion of the city by building a city wall around the south-western hill. This was given expression in Ps. 122.3, “Jerusalem is a city that is joined together” or, as the ESV has it “Jerusalem—built as a city that is bound firmly together”. A section of this wall has been excavated in the Jewish Quarter of the Old City and called “The Broad Wall”.
3. Jerusalem in 30 A.D. This drawing was first made for The Times Atlas of the Bible and later made available as a poster. It shows Herodian Jerusalem at its peak with landmarks indicated such as the Temple Mount (of course), the Herodian and Hasmonean Palaces, the Bethesda and Siloam Pools and two alternatives for Golgotha.

2 thoughts on “Jerusalem – reconstruction drawings in the various periods”