Excavations in Jordan have revealed copper mines that were in use during the 10th Century B.C., i.e. the time of King David and Solomon. The site is called Khirbat en-Nahas, which means ‘the ruins of copper’. The massive smelting plant was probably operated by King Solomon, who may have derived part of his wealth from this site, just a King Herod the Great amassed huge wealth from the mining of copper in Cyprus. The site has also revealed some Egyptian artifacts, which may be related to the invasion of the Egyptian Pharaoh Sheshonq (Shishak of the Bible), soon after Solomon’s death. You can watch an interesting video here about these excavations, which were led by Thomas Levy of the University of California in San Diego. 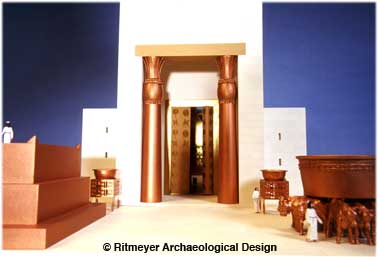 Huge amounts of bronze, an alloy of copper and tin, were used in Solomon’s Temple for the two pillars, Yachin and Boaz, the Altar, the Great Sea and other installations, as shown in this model of Solomon’s Temple.

Some scholars have cast doubt on the existence of the fabled King Solomon, because of the few remains of the 10th Century B.C. that have been found, especially in Jerusalem. However, when King Hezekiah created a new artificial platform around the renovated Temple, the remains of Solomon’s Royal Complex, such as his Palace and the House of the Forest of Lebanon, may have been dismantled and therefore will never be found. It does not mean, of course, that they never existed.