It is always exciting when an Hebrew seal of the 7th Century B.C. is found, as announced today here. In an excavation 100 m west of the Western Wall an impressive seal was found. It shows a Hebrew archer in Assyrian style military outfit and his name, Hagab, engraved in ancient Hebrew script next to him. At least he doesn’t look like a grasshopper, which the Hebrew meaning of this name is. The name appears in reverse, so that it would come out right, when impressed in clay. 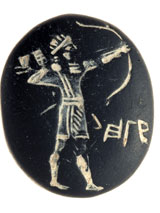 It was stated that this name of Hagab also appears in the Bible, namely in Ezra 2.46. That is where the comparison ends, of course, for this Hagab was one of the Nethinim, temple servants. Temple servants were not usually dressed in warrior’s suits.