Zachi Zweig, an archaeologist who is involved with the Temple Mount Sifting project, kindly send me the paper [in Hebrew], which he gave at the recent conference on the Temple Mount at the Bar-Ilan University. I commented on this find in an earlier post. Here is an abstract:

“Hamilton describes the discovery of a plastered cistern that was excavated below the easternmost door of the present El Aksa mosque, north of Cistern 9 [according to Warren’s numeration – see map]. The descent to [the cistern] was from west to east by means of a flight of steps, with the bottom step some 3 m. [10 feet] below the present floor of the mosque. The remains of some five steps were discerned, which were built against a plastered wall, which was about 90 cm wide [3 feet].

Unfortunately, Hamilton did not publish additional details – not one picture or plan. However, in the Mandatory Archives there was a photograph of the five steps, which descend to the opening of the cistern. The top of the steps is located some 1.50 – 2 m. [6-7.5 feet] below the present surface and to the south of it and adjacent to it, although at a little distance, there is a thick wall. This is most likely the same cistern. The steps appear to have been cut out of the rock and this points to the fact that the level of the top of the rock in this location is at about 1.50 m. [6 feet] below the level of the present pavement.”

The exit of the cistern is located deep below the level of the floor of the mosque. Hamilton dated it to the late Roman period. However, as the remains of a dividing wall can be discerned, Zachi concluded that it could have been a mikveh (Jewish ritual bath), see picture below: 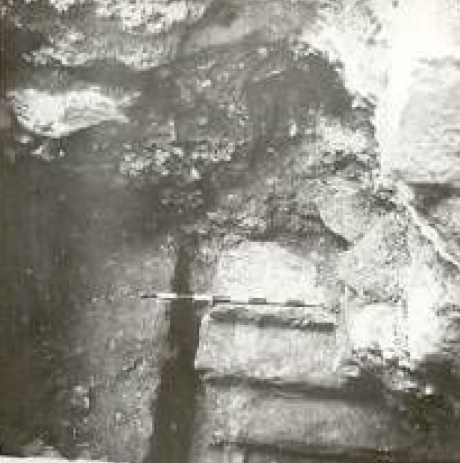 It is located a little to the east of the underground passage which leads up from the Double Gate to the Temple Mount. Ronnie Reich has identified Cistern 6 and 36 as mikva’ot, but these are located in the original Square Temple Mount. These could have been added in the Second Temple period, as they are located close to the surface and no First Temple period mikva’ot are known.

This latest one, however, is located much lower down and in the Hasmonean extension of the Temple Mount and may therefore have been one of the earliest mikva’ot in Jerusalem: 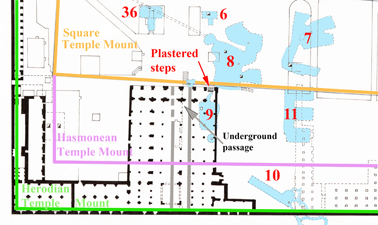 Worshipers in the Hasmonean period, who had not purified themselves before going to the Temple Mount, perhaps had the opportunity to do so in this mikveh, if it was a mikveh indeed.