Joseph Lauer passed on this interesting information:
“Dr. Eliot Braun noted on the ANE-2 list that the January 9, 2009 Ha’aretz Hebrew online edition has an illustrated report about the discovery in the City of David excavations led by Dr. Ronny Reich and Eli Shukron of a miniature ivory pomegranate and a bulla (among over 170 other bullae found in the excavations).
The article, which has not yet appeared in Ha’aretz English online edition, may be read here. 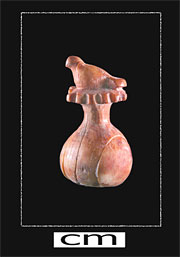 picture of the pomegranate

Also on the ANE-2 list, Dr. Victor Avigdor Hurowitz has taken issue with certain statements made in the article, including “that the pomegranate found in the City of David is similar in form to the 400 decorative pomegranates which are described in Solomon’s Temple according to the book of I Kings 7:43 (should be v. 42 and cf also v, 20!)”. Calling this “absolute nonsense”, he points out that “The pomegranates in the temple descriptions were part of the Yakhin and Boaz pillar crowns which were made of bronze and not ivory as is the new pomegranate.” With regard to the dove sitting on the pomegranate, he writes that I Kings 7 “doesn’t describe the pomegranates at all, let alone the doves on top of them, unless we somehow take hassebakah mentioned along with weharimmonim as a corruption of hassobek (dove coop).” He concludes that “At most one can say that the newly discovered pomegranate can be, like pomegranates mentioned in various biblical passages, a decorative motif known also from cultic contexts.” See here.
Additional ANE-2 postings have been made. I’m sure that many more articles and postings will follow.”

One thought on “Ivory pomegranate found in City of David excavations”