While I was abroad, the IAA reported that a 2,000 year old mikveh has been found near the Temple Mount:

“The miqve was discovered inside the western hall of a splendid structure that is located just c. 20 meters from the Western Wall. Parts of the building were discovered in the past and the Israel Antiquities Authority is currently exposing another one of the three halls inside it. It is one of the most magnificent structures from the Second Temple period ever to be uncovered.”

This “magnificent structure” is the Council-chamber, also known as the Masonic Hall, which was first discovered by Charles Warren in the 1860’s. It is located near the Western Wall and the bridge over Wilson’s Arch was later partly built over it. This drawing shows the location of the Council-chamber, the Xystus and the Hasmonean Palace in relation to the Temple Mount: 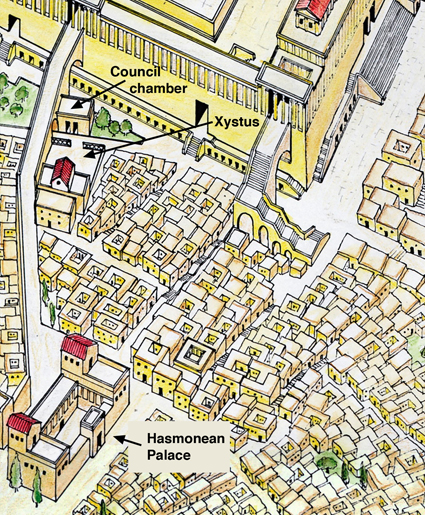 The confusing part in the rest of this report is the following sentence:

“In his book The War of the Jews, Josephus Flavius writes there was a government administrative center that was situated at the foot of the Temple. Among the buildings he points out in this region were the council house and the “Xistus”- the ashlar bureau. According to the Talmud it was in this bureau that the Sanhedrin – the Jewish high court at the time of the Second Temple – would convene. It may be that the superb structure the Israel Antiquities Authority is presently uncovering belonged to one of these two buildings.”

Josephus actually writes the following about the northern part of the First Wall in The War of the Jews 5.144:
“Beginning on the north at the tower called Hippicus, it [the city wall] extended to the Xystus, and then joining the council-chamber terminated at the western portico of the temple.”

The Xystus was not a building, but a paved open space for assembly, used for public speeches. In Greek, xystus means smooth, polished flag-stones. Previously, the Gymnasium was located there. In The War of the Jews 2.344, Berenice stood watching on the roof of the Hasmonean Palace, while King Agrippa made a speech to the people which he had summoned to the Xystus below. If they were inside a building, Berenice could never have watched this event. It is therefore a mistake to confuse the Xystus with the “ashlar bureau”, better known as the Chamber of Hewn Stone (Lishkat haGazit in Hebrew) of the Mishnah.

The archaeologist Alexander Onn correctly calls the Council-chamber a government administrative building. The mikveh with its 11 steps was built later into the building, testifying to the growth and development of Jerusalem later on in the Herodian period.

The Council-Chamber was a beautifully designed building with pilasters cut into the interior walls, resting on a plinth which was located about 1 meter (3 feet) above the original floor. The newly discovered mikveh is located in the western hall of this building, well below the original floor level. Below is my reconstruction drawing, showing the location of the mikveh: 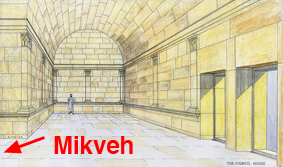 4 thoughts on “A 2,000 year old Mikveh exposed in the Western Wall tunnels”