Despite the fact that this building has been known for several decades, only now has it been possible to restore it using modern techniques:
“Although the new hall was originally discovered decades ago, it lay untouched for years due to fears that the ancient stones were not stable enough for excavation. A new technique was found to support the walls from crumbling, enabling workers to remove the rubble.”
Artifacts from both the First and the Second Temple periods were found. The name given to this building, “Hall of Ages” (or “Hall of Eras”), is a bit ridiculous, as remains of these periods have been found in many other sites in Jerusalem.
Within a few months it will be opened to the public. I look forward to discovering where this building is actually located. I guess it is part of the old Makhkama building shown on the plans of Charles Warren. If so, it should be located near the Masonic Hall, mentioned in my previous post, and Wilson’s Arch.
For full story, see the Jerusalem Post’s article here. 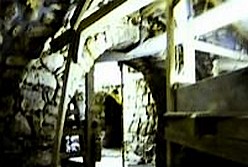 One thought on ““Hall of Ages” near the Temple Mount rehabilitated”