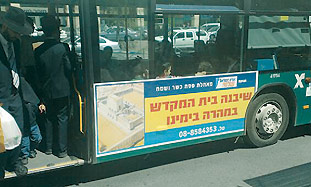 While tensions continue to simmer around the Temple Mount after riots in and around the capital’s Old City earlier this month, a new campaign calling for the construction of the Third Temple atop the holy site has made its way to the sides of 200 Egged buses in the city, which now sport posters featuring a picture of a rebuilt temple on the Mount, and nothing else.

The posters, which contain the phrase, “May the Bais Hamikdosh be rebuilt speedily and within our days,” were sponsored by the Our Land of Israel group, which is led by Rabbi Shalom Dov Volpo and activist Baruch Marzel, leave out the site’s current structures – namely the the Aksa Mosque and the Dome of the Rock.

The campaign’s organizers chose to plaster the posters on buses whose routes take them through predominately Arab neighborhoods of east Jerusalem.

With regards to the campaign, Volpo said Israel is waiting breathlessly for the coming of the messiah and the rebuilding of the temple.

“The Arabs and President Obama know that the Temple will be built on the Temple Mount,” he said. “Instead of the temporary buildings that are there today.”

Speaking to The Jerusalem Post on Sunday, Marzel said it was no mistake that the Islamic shrines were left out of the picture.

“We’re representing the truth, in front of everyone, and saying out loud what every Jew believes,” Marzel said. “That the Third Temple needs to be built immediately on the Temple Mount and that the mosque should not be there.”

“When we reach the end of the Pessah Seder tomorrow night, he continued, “we’ll say, ‘Next year in a rebuilt Jerusalem.’ What does ‘rebuilt’ mean? It means with the Third temple intact.”

Marzel brushed off the furor the ads might elicit from the capital’s Muslims, saying, “It upsets them that we’re alive, and that we’re living here.”