The Large Tower, explored by Warren and one hundred years later by Dame Kenyon, is constructed of stones of the character identified as Phoenician at Samaria. The header-and-stretcher construction is also identified as Phoenician at Samaria. Kenyon stated, “The date of these earliest walls, on the basis of the deposits against them, is, on the field estimate of the pottery, eighth century B.C. OR EARLIER (Digging up Jerusalem p.115). She also states in the caption under pl. 38, “Wall in Site S II on eastern crest of eastern ridge, which can be STRATIGRAPHICALLY dated to 8th century B.C….”. This area of Jerusalem is not a Tel! You cannot stratigraphically date anything here. This unique topography, consisting of a steep slope with exposed bedrock demands unique methodology. Kenyon states that, “Close at hand, there was a wall of the time of Solomon, from which the builders of the eighth century B.C. derived their stones”. King Hezekiah had a unique style of construction as seen in the Broad Wall, the Outer Wall, and his section of wall cutting across the Jebusite angle above the Gihon Spring. None of these examples give a hint of header-and-stretcher characteristics. Why would Hezekiah go through the trouble of re-stacking Solomon’s massive stones to move the tower only a few meters? Kenyon used the dating method that she was familiar with but it led her to the wrong conclusion regarding the tower here. The tower is certainly Solomonic and the connected wall and the Golden Gate, all of which display Identical characteristics.

If it is true that nothing can be dated stratigraphically in this part of Jerusalem, how can you then insist on a Solomonic date for the wall in Kenyon’s site SII and Benjamin Mazar’s Field 23? Kathleen Kenyon excavated down to the bedrock in this area and indeed concluded that:

“Beneath … the Byzantine wall … is a wall which probably belonged to a projecting tower. The date of these earliest walls, on the basis of the deposits against them, is … eighth century B.C. or earlier.” “… these walls were constructed of re-used stones … with irregular projecting bosses having margins on one, two or three sides.”

If these stones are indeed in secondary use, which I am not convinced of, it is possible that these are rejects or surplus masonry from Hezekiah’s square Temple Mount construction.

If you would examine the elevation, section and Isometric drawing of the Ophel Wall on Warren’s Plans, Elevations, Sections, etc., (1884), Plate 40, then it is clear that this L-shaped wall is built against an earlier wall and one can still see today that two different First Temple period building phases are represented in this area. That is why Warren called this wall section the “Extra Tower” or “Corner Turret”, i.e. it is a tower that was later added to strengthen an earlier fortification or part of the city wall. If the L-shaped wall, as you insist, is Solomonic, does that make the wall against which it is built Canaanite? If there are two construction phases in a building, that is called stratigraphy, showing that one wall is earlier than another. This stratigraphy is not different from that on a tell. This picture shows that the stratigraphically four building constructions can be identified: 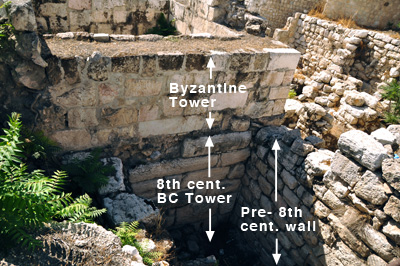 1. The Byzantine Tower
2. Excavating inside and below the Byz. tower, a Herodian mikveh was found that was built against the inside wall of the “Extra Tower” (not visible in the picture)
3. The 8th century L-shaped “Extra Tower”
4. The pre-8th century wall against which the “Extra Tower” was built, which may be Solomonic if that can be proved conclusively.

Kenyon dated this L-shaped corner construction to the eighth century B.C. or earlier, but that does not necessarily mean that it is Solomonic. You compared it with the Phoenician masonry in Samaria, but that dates to the 9th century and is not Solomonic. A similar style masonry has been found in the sanctuary walls in Tel Dan, which is also post-Solomonic. I had suggested that there is an historical link between the “Extra Tower” and the masonry near the Golden Gate, but neither of these two constructions can be Solomonic.