Joe Lauer alerted me to two recent reports, one that announces that “King Herod has lost his claim to being the original contractor of certain ancient structures in the area” and another that reports about “Revelations of an ever-changing past”.

From these reports I understand that archaeologists found an underground wall and intersecting aqueduct, both built by the Roman 10th Legion a little east of the Jaffa Gate, and drew the conclusion that the Tower of David was not the Hippicus Tower built by Herod the Great:

“The archaeologists’ discoveries had major implications. For one thing, they determined that the current Tower of David was not an extension of Hippicus, but rather of the Phasael tower.”

According to Josephus, these towers were built in the First Wall and not in the Second Wall. They stood at the northwest corner of Jerusalem and protected the city and Herod’s Palace that was built to the immediate south. Hillel Geva has shown conclusively that the Herodian Tower in the Citadel Museum is the Hippicus Tower.

“You have to understand that a 150-year mistake has finally been corrected,” explains Sion, referring to the Hippicus hypothesis. Second, it seems that countless maps and drawings of the so-called second wall suddenly became irrelevant.”

The Second Wall, according to Josephus, began at the Gennath Gate, which had been excavated by Avigad some 400 meters to the east of the Jaffa Gate, and ended at the Antonia Fortress at the northwest corner of the Temple Mount. Some maps still show the Second Wall going north from somewhere near the Citadel (David’s Tower) and then turning east to keep Golgotha outside the city and then going north again in the direction of the Damascus Gate. It will be good to get this “kink” out of the line of the Second Wall, but I am not too optimistic about this as it takes a long time for publishers to catch up with the latest archaeological discoveries. This plan of Jerusalem published in Dan Bahat’s Atlas of Jerusalem still has the kink in it (see red arrow): 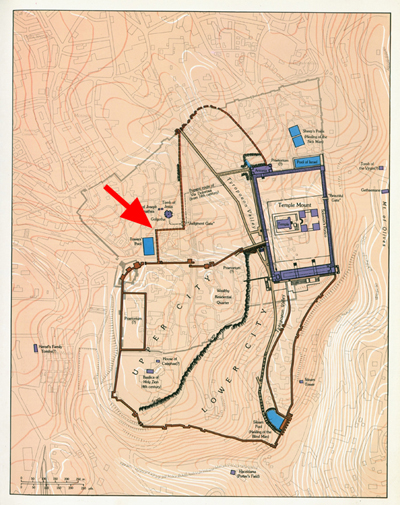 The “conceptual revolution about life in the city at the end of the Second Temple and Roman period (63 B.C.E.-324 C.E.)”, which the excavators claim to have made suddenly, however, had already been made by Avigad in the 1980’s, when he discovered the Gennath Gate and the beginning of the Second Wall in the area of the Cardo in the Jewish Quarter. The maps I have drawn for him and all subsequent maps of Jerusalem always showed that the Second Wall began at the Gennath Gate, which is located halfway between the presentday Jaffa Gate and the Temple Mount. The Second wall has been shown correctly, for example, in the New Encyclopedia of Archaeological Excavations in the Holy Land (1993): 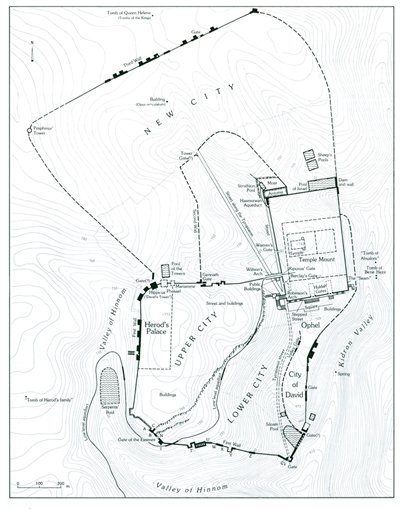 I don’t quite understand their claim about the Hippicus Tower, which is a solid tower built on the bedrock. The masonry is Herodian and the 10th Legion’s aqueduct and wall in question does not come near the base of this tower. The fact that they acknowledge that an Herodian aqueduct may be located below the Roman aqueduct they found, proves that their claim about the Hippicus Tower still needs to be substantiated.

6 thoughts on “Has King Herod lost his claim to the Hippicus Tower?”