It is feared that the destruction of the Temple Mount by Muslims continues. It has been observed that work is taking place to the east of the Dome of the Rock, where the Court of the Priests and the Altar were located. According to this report:

“The Waqf works are constant, we see tractors going to and fro carrying earth. The work is taking place near the Dome of the Rock, exactly in the place between where our Holy Temple’s courtyard and the Altar used to stand. The Waqf claims they are doing pavement work there, or so they advertise in the news sites, but in practice they surrounded themselves in white burlap and we see there is scaffolding. I suppose that for paving works there should be no need for scaffolding.”

The bedrock is only a few feet below the pavement and the layers between it and the pavement could easily be destroyed. On a visit to the Temple Mount last year, we observed repairs to pavement north of the Dome of the Rock and it was clear that no digging with tractors was involved: 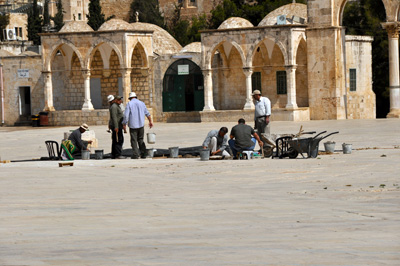 3 thoughts on “The Destruction of the Temple Mount continues”