The report tries to draw a historical parallel with the Temple Mount that stood in Jerusalem 2,000 years ago:

Two thousand years ago, stone bridges connected the Jewish Quarter directly to the Temple Mount, saving the high priests the long trek down and back up.

There was actually only one bridge, namely the Bridge of the Priests that was constructed over Wilson’s Arch between the Temple Mount and the Upper City – now the Jewish Quarter. The other arch, Robinson’s Arch, carried a stairway down to the street along the Western wall: 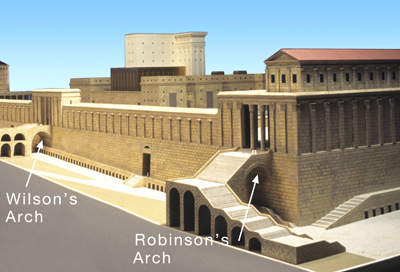 Despite the fact that the exit of the tunnel will be located about 1,000 feet to the west of the Temple Mount, according to this report the Arabs are, predictably, against it.

The purpose of the underground elevator “would greatly improve access for visitors in wheelchairs or those with other disabilities, who now have to contend with several flights of stairs”, but the Arabs claim “that the area in front of the wall could be used as a base from which to attack the mosque compound.” Even helping disabled people in Jerusalem is looked upon as suspicious by the Arabs.

3 thoughts on “Elevator for the disabled near the Temple Mount”