Before proceeding further with Recommendations from our Library, a giant of a book looms in our path. This is George Adam Smith’s: “The Historical Geography of the Holy Land.” It is not a large book in the physical sense, (or expensive), like our first recommendation: “The Sacred Bridge.” The greatness of this little book (first published in 1894), lies in the genius of its author to evoke the Land with his word-painting. He had a poet’s ear and words were his music. They came tumbling from his pen like streams. His ability to delineate the Land with all its sounds and scents and to people it in imagination with its successive historical inhabitants has never been surpassed. 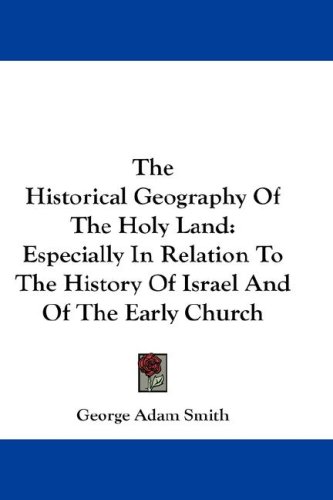 Lovers of the Land today have a vast array of resources which make it possible to transport themselves there in imagination. There are CD ROMs, videos and satellite atlases. But, could any flyover give you that feeling of exactness you get when reading Smith’s Historical Geography (p.81): “There is the perspective of the Jordan Valley as you look up from over Jericho, between the bare ranges of Gilead and Ephraim, with the winding ribbon of the river’s jungle and the top of Hermon, a white cloud in the infinite distance. There is Gilead, where you ride, 2000 feet high, under the boughs of trees creaking and rustling in the wind, with Western Palestine before you. There is the moonlight view out of the bush on the north flank of Tabor, the leap of the sun over the edge of Bashan, summer morning in the Shephelah and sunset over the Mediterranean, when you see it from the gate of the ruins on Samaria down the glistening Vale of Barley?”

George Adam Smith, a Scottish Old Testament scholar, made four visits to the Land between 1880 and 1904, before the great changes which were wrought on the country by European colonists and Jewish immigrants. His intention in writing a Historical Geography was to: “give a vision of the Land as a whole” and to “help you to hear through it the sound of running history.” He certainly succeeded in meeting these aims. Some of our Israeli colleagues had memorised whole chunks of HGHL (as it was affectionately called)! Our much-missed friend and colleague, Yizhar Hirschfeld, once delighted us with a rendition of Smith’s description of Tel Gezer: “: “Shade of King Horam , what hosts of men have fallen round that citadel of yours! On what camps and columns has it looked down through the centuries, since first you saw the strange Hebrews burst with the sunrise across the hills, and chase your countrymen down Aijalon – that day when the victors felt the very sun conspire with them to achieve the unexampled length of battle. Within sight of every Egyptian and Assyrian invasion of the land, Gezer has also seen Alexander pass by, the legions of Rome in unusual flight, the armies of the Cross struggle, waver and give way, Napoleon come and go, and British yeomen come and stay. If all could rise who have fallen around its base – Ethiopians, Hebrews, Assyrians, Arabs, Turcomans, Greeks, Romans, Celts, Saxons, Mongols and English – what a rehearsal of the Judgement Day it would be!” (p.154).

But we treasure this work, not just for Smith’s unforgettable prose, but also for his erudition. His depiction is bolstered by reading that embraces the entire culture of the Middle East, much of it absorbed in the original languages. He quotes Hebrew, Arabic, Latin, Greek, French and German sources with the same facility as he does English. Herodotus steps out with the general to whom Napoleon dictated his memoirs of the campaigns in Egypt and Syria. Nasir-i-Khusrau is in there with Gertrude Bell and even some of his own Bedouin guides are quoted. But most of all it is the Hebrew Scriptures that he mines for his review of the various invasions the Land has undergone because, as he writes: “to these the pages of prophecy are as sensitive as the reedbeds of Syria to the passage of the wind and the flood” (p. 35).

It is as a preacher and teacher that he was best known. However, one of his travel companions observed that he would have made a great general, as he had both the natural gift of leadership and the commander’s eye for country. Another great general, General Allenby, consulted Smith’s Historical Geography daily (together with his Bible), using it as a kind of military handbook in the Palestine campaign of 1917/18. Indeed, the German-Turkish army was defeated by a surprise British attack in Michmash in a replay of Jonathan’s rout of the Philistines in the same place recorded in 1 Samuel 14. Both Jonathan, with his armour-bearer and the British force had to creep up the same gorge, the Wadi Suweinit, with the rocky outcrops known as Bozez and Seneh on either side, in order to reach the enemy camp. Another boon for the British Army was the fact that when their stores of water ran dry in that parched land, they were able, through studying HGHL and its original maps, to rediscover many wells whose location had vanished from local memory.

The Historical Geography of the Holy Land is a classic, not in the sense of a respected book gathering dust on a bookshelf, but as a trusty tool of the trade, stuffed into the pocket of every serious explorer of the Land from his time and since. And if you cannot make the journey, just open the book, with an atlas by your side. Every page is a picture-frame, capturing the essence of and deeply enriching our experience of that “glory of all lands.”

All quotes from The Historical Geography of the Holy Land are from our yellowed and watermarked 1966 Fontana Library Edition, Third Impression, 1973.

3 thoughts on “Recommended: The Historical Geography of the Holy Land”