One of the readers of a previous post drew attention to a Palestine Exploration Fund (PEF) photograph of the lintel of Barclay’s Gate. In the caption, we are taken to task for publishing an incorrect interpretation of the lintel in BAR XV No.6, pages 23-42. 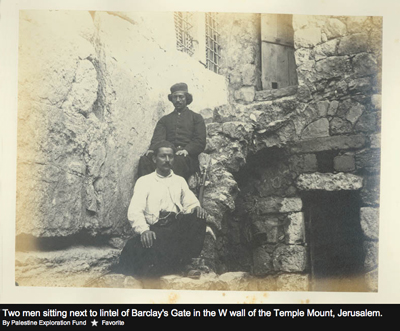 The incorrect black outline on the photograph on p. 28 of the BAR issue was unfortunately added by the editors and not by ourselves. For the correct drawings of the lintel of Barclay’s Gate, see our book The Quest, Revealing the Temple Mount in Jerusalem, pp. 26, 28.

Whoever put up this caption didn’t look carefully at the drawing next to the photograph in the BAR issue, where the lintel is drawn correctly.

Barclay’s Gate is one of the four gates in the Western Wall of the Herodian Temple Mount:

This study drawing shows the depth of the original gate, which is still buried underground:

This close-up photograph shows that the projection on the left side of the lintel is not very sizeable:

A central part of the lintel can be seen in the small room where women pray:

Here is a view of the same lintel from inside the Temple Mount:

Barclay’s Gate is one of the two lower gates in the Western Wall, the other is Warren’s Gate. Both these gates had internal passageways with steps by which one could ascend to the Temple Mount. This reconstruction drawing shows how Barclay’s Gate worked in the Second Temple period:

If the new plans for the Western Wall plaza were carried out, the full size of this gate would be visible to all.