In a previous post we reported on the The Arch of Titus Digital Restoration Project in Rome, led by Prof. Steven Fine, which has as its aim the scanning of the menorah panel for evidence of ancient color.

Prof. Steven Fine noted that in the first presentation at the upcoming April 4 Kennes Torah Umadda (Congress of Torah and Science) in Jerusalem he will be discussing — for the first time in Israel — the discoveries made by the Arch of Titus Digital Restoration Project last summer and the implications of advances in the study of polychromy for the study of the arch (and of Jewish visual culture in general).

Here is the account that has been  published by the Center for Israel Studies of the Yeshiva Universtity in New York.

The Arch of Titus Project will have important significance for the study of Roman architecture, as no monument of the Flavian period has yet been subjected to pigmentation analysis to reveal its original coloration. It is also projected to be of great importance for the study of the appearance of the sacred vessels of the Second Temple in the first century CE, as well as of the Herodian building projects in ancient Judaea, especially King Herod’s rebuilding of the Second Temple in the first century CE. It will thus expand the reach of the new field of research surrounding polychromy in the ancient world beyond Classics and Classical Archaeology into the fields of Judaic studies and early Christian history.

Steven Fine had asked me earlier this year what I thought about Eilat Mazar’s color reconstruction of Herod’s Temple Mount, whom she had  published in her Complete Guide to the Temple Mount Excavations, p. 43, with this comment:

The colours were chosen on the basis of parallels of painted architectural remains in the Judean Desert at Cypros and Masada. 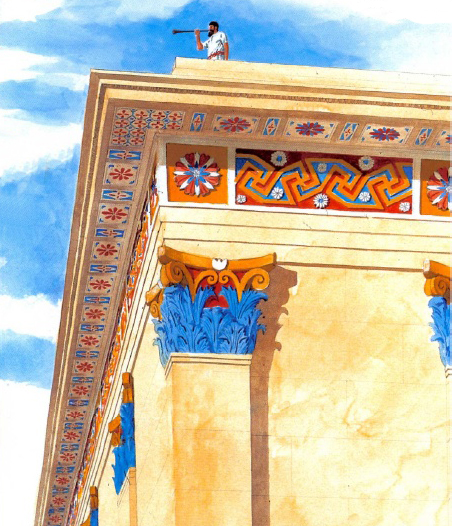 As far as I remember, paint was only found on plaster in these sites, not on stone. No remains of any paint has been found so far on any excavated Herodian stone remains in the Temple Mount Excavations led by Prof. Benjamin Mazar from 1968-78.

The comment of archaeologist Stephan Zink in the above mentioned article is interesting:

The 2009 study of the remains of the Temple of Apollo on the Palatine by conservator Heinrich Piening, another member of our team, and archaeologist Stephan Zink showed that “most surfaces of the temple were kept uncolored as white marble (probably from Carrara) but a carefully-chosen color palette highlighted strategic elements such as capitals, entablature and doorframe. Although evidence for the original coloring remains fragmentary, sufficient information is available to allow us to consider the design strategies that lie behind the color scheme of the temple…”

So, some paint may have been used, but only sparsely. In his description of the Jerusalem Temple, Josephus (War 5.207-10; 222-23) is quite clear that the facade of the Temple “was covered with gold all over” …  “with plates of gold of great weight” and that “those parts that were not gilt, were exceeding white.” No color was therefore used in the entablature and columns that decorated the Temple’s facade.

2 thoughts on “The Arch of Titus Digital Restoration Project”