There was much excitement in our house last week when the Biblical Archaeology Jerusalem Map by Carta (see previous post) arrived. 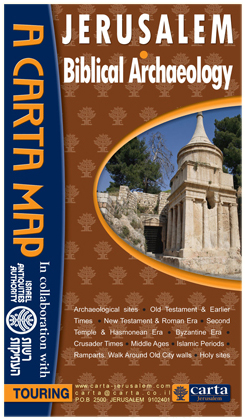 Spreading the chart out on the table, we were able to retrace many of the trips and explorations we made when living in Jerusalem. At the time, some of these had required poring over Ordnance Survey maps and reading archaeological reports before we could identify the sites involved. Now, with the acquisition of this map, we can easily find the location of these sites, as well as, and most importantly, the latest sites to have been discovered.

Twenty-three years ago, the publication of the New Encyclopedia of Archaeological Excavations in the Holy Land, a a joint venture by the Israel Exploration Society, Carta, and Simon and Schuster’s Academic Reference Division, was a landmark in the quest to provide a comprehensive work that would summarize the results of archaeological work in the Land of Israel for the English reader. It had a 102-page long section on Jerusalem. Ephraim Stern wrote in the Editor’s Foreword to the Supplementary Volume, published in 2008:

“Since the publication in 1993 of the four volumes of the New Encyclopedia of Archaeological Excavations in the Holy Land (NEAEH) archaeological excavations have continued at a staggering pace. Many of the entries of those four volumes quickly became outdated and the need arose for this volume, which updates the NEAEH to the year 2005. It is a joint venture of the Israel Exploration Society and the Biblical Archaeology Society.”

So, while we await the next update, a mammoth undertaking, this handily portable map will play a vital role in guiding the visitor around the archaeological sites of Jerusalem,

The front part of this large map (63×94 cm, or 25×37 inches) shows the Old City and its surroundings, while the reverse side is dedicated to the Old City in much greater detail. The map was made in collaboration with the IAA (Israel Antiquities Authority, or Reshut Atiqot in Hebrew), with the text and scientific advice provided by Dr. Yuval Baruch. The archaeological sites are described in small text boxes with an arrow pointing to the exact location of each.

Most of the sites on the front part are familiar to us, but by no means all of them are. It is good to see the site of Lifta on the northwest of the city included. This has been identified as the site of the Waters of Nephtoah of Joshua 15.9 and 18.15, defining here the border between Benjamin and Judah. We remember exploring the village and its spring in the 1970’s, but then it seemed very much off the beaten track, being hidden away on two steep slopes in the last valley of the ascent into Jerusalem.

There are other sites we are not so familiar with such as Khirbet Adaseh North and Khirbet Adaseh, 2 miles to the southeast. Adasa, was, of course, the place where the Maccabees were victorious in their battle against the Seleucid general Nicanor, who lost his life there.

The Old City map is also informative with sections dedicated to the Kidron and Hinnom Valleys, Mount Zion, the City of David and the Aqueducts of Jerusalem. We are pleased that the Tomb of Annas the High Priest, a site we were able to identify in the early 1990’s, is included among the sites in the Hinnom Valley.

A glaring omission on this side of the map is any detail on the vast platform of the Temple Mount. However, giving the impression that the site is a terra incognita is part of the political reality in this area. Only some of the gates are mentioned, with the Double and Triple Gates unfortunately still called the Huldah Gates. The original Huldah Gates were in fact located in the southern wall of the pre-Herodian Temple Mount some 72 m (240 ft) north of the present Southern Wall.

No reference is made to the Step, which is the remains of the Western Wall of King Hezekiah’s Square Temple Mount or of The Rock, identified by many as the site of the Holy of Holies of Solomon’s Temple. The many well-heads visible on the platform indicate the location of the many underground cisterns, of which two, Cisterns 6 and 36, may have been mikva’ot. These would also have added interest to this part of the map.

Information on the Temple Mount platform is, however, available in our guide book Jerusalem, the Temple Mount in which we have produced a map showing 19 points of archaeological and historical interest: 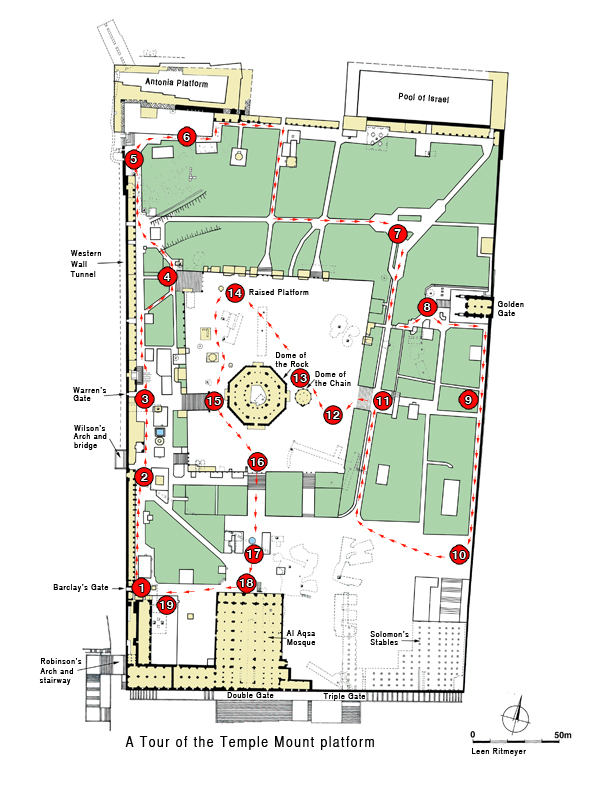 Despite these shortcomings, however, we foresee copies of this map being given as presents for those who love exploring the Old City of Jerusalem and its environs. And if you have friends visiting who have been to Jerusalem, framed reproductions are bound to stimulate some lively conversation.