The discovery of the Roman odeon was made after removal of 8 meters of soil that exposed 8 stone courses of the Western Wall not previously seen:

“After the removal of this layer of soil, the archaeologists were surprised to discover that it covered the remnants of an extraordinary theater-like structure from the Roman period confirming historical writings that describe a theater near the Temple Mount. These exciting findings will be presented to the public during a conference titled New Studies in the Archaeology of Jerusalem and its Environs, which will take place at the Hebrew University. This year’s conference will mark 50 years of archaeology since the unification of the city.” 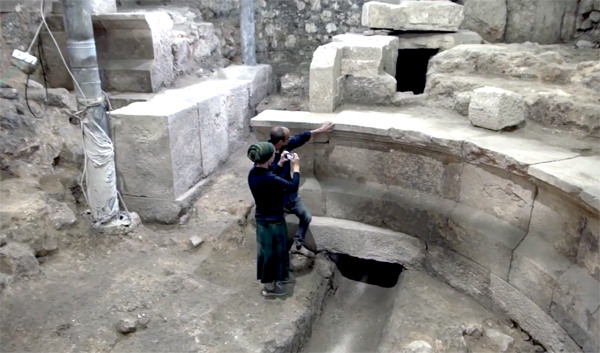 This odeon was not completed and was abandoned before it could be used. The excavators suggest that that may have been the result of the Jewish uprising against the Romans during the Bar Kokhba Revolt, a rebellion of the Jews of the Roman province of Judea, led by Simon bar Kokhba in circa 132–136 CE.

Because of its proximity to the Western Wall, this odeon could not have been very large, but its discovery provides us with a clearer picture of what Jerusalem looked like as the rebuilt Roman city of Aelia Capitolina.

A word of caution: some reporters have dubbed this find “Jerusalem’s Lost Theatre”, but this may give the wrong impression. Josephus indeed mentions that Herod built a theatre in Jerusalem (Antiquities 15.268), but this is not the one that has been found. Herod’s theatre, if it ever existed, must have been built before 70 AD, but the archaeological evidence associated with this newly found structure indicates that it was built after this date.

13 thoughts on “Remains of Roman odeon found in Jerusalem”