The place where the Tabernacle stood 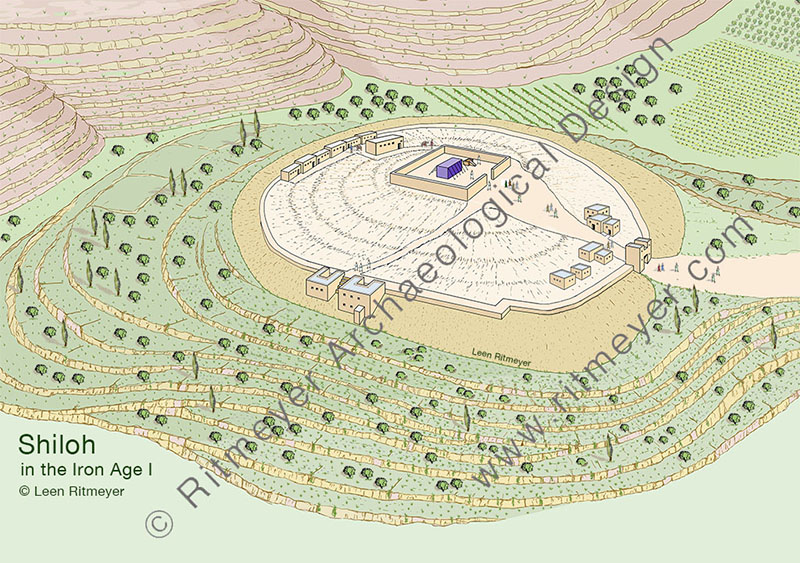 At present, renewed excavations are being carried out under leadership of Dr. Scott Stripling, on behalf of the Associates for Biblical Research (ABR). He said that he answered the call of the prophet Jeremiah, who wrote: “Go now to my place that was in Shiloh … and see! (Jeremiah 7:12) – and so he did!  What do we know about Shiloh and what did he and his team find?

Certain places have a soul-stirring quality about them and on visiting them, you feel you are walking through shades of history in company with those who walked before you. Shiloh is one such place. To go back in time to this site that was so significant in the early history of Israel and in the lives of biblical characters such as Hannah and Samuel, is an exciting experience. No other biblical site has a geographical location so accurately described as that of Shiloh. According to Judges 21:19:

“Shiloh, is north of Bethel, on the east of the highway that goes up from Bethel to Shechem, and south of Lebonah.”

These directions could be followed today on a GPS or road atlas. Using this description, the American philologist E. Robinson, was able to identify Shiloh with Khirbet Seilun (Tel Shiloh) as early as in 1838, as it matches this geographical description exactly. Ancient sources such as Eusebius and Jerome confirm the accuracy of the identification. Today, this road on which Shiloh is located, is called Highway 60. It is nowadays also called the “Route of the Patriarchs”, as it follows the path of the ancient road that ran along the Central Mountain Range from Hebron to Shechem, that features often in the travels of the biblical patriarchs.

During the wars waged by the Israelites against the Canaanites in the heartland of the country, the Tabernacle and the Ark stayed in Gilgal. Then, we read in the Book of Joshua: “the whole congregation of the children of Israel assembled together at Shiloh and set up the Tabernacle of meeting there.” (Joshua 18:1)

In contrast to many of the sites we have encountered, the site of Shiloh is almost devoid of notable features. All that remains is a small tell of not more than eight acres, secluded at the end of a fertile and quiet valley in the heart of the hill country of Ephraim, (although a thriving Jewish settlement has taken root adjacent to the tell). It was most probably the very seclusion of this site that determined its choice as the new site of the Tabernacle. Here the allotment of territory to the various tribes could proceed unhampered by interference of the Canaanites who still held large areas in their possession further to the north, south and west.

Shiloh later became the permanent seat of the priesthood. The story of Hannah and Samuel in the first chapters of the Book of Samuel takes place against the background of Eli as High Priest. From these chapters, we get the impression that the Tabernacle was kept in some sort of permanent structure referred to as the “house of the LORD” (Hebrew – beth Yahweh) (1 Sam. 1:7,24 etc.), in contrast to the movable structure which was continually erected and dismantled during the wilderness wanderings. The Mishnah says as much:

“After they came to Shiloh, the high places were forbidden. There was no roof-beam there, but below was a house of stone and above were hangings and this was the ‘resting place’ “ (Zebachim 14.6).

Tell Shiloh was first excavated by two Danish expeditions in the 1920’s and 30’s. Their excavations determined that the site was surrounded by a city wall in the Middle Bronze Age period, and had been destroyed by the Philistines in the mid-eleventh century BC. An Israeli expedition team led by Israel Finkelstein’s team in the 1980’s, made interesting findings on the west of the tell in their so-called Area C. Here they found, as shown in my reconstruction drawing, two Iron Age or Early Israelite buildings built against the outside of the Middle Bronze Age city wall.

These pillared buildings contained an abundance of early Israelite pottery with over twenty of the collar-rim jars (although of a different collar-rim type than the Bronze Age ones) that characterize Israelite settlement in this part of the Land. Evidence that the buildings of this period had been destroyed by fire, confirmed the conclusions of the Danish teams. Because of the ritual nature of the objects found in the debris above the destruction level of these buildings, it was suggested that they stood fairly close to a large structure of a cultic nature on the summit. Can we deduce from this that the Tabernacle stood on the summit?

Certainty is impossible in view of the destruction of the earlier remains in this area. However, the identification of the tell of Seilun with ancient Shiloh is undisputed and these pillared buildings are authentic remains from the stirring times which saw the erection of the Tabernacle in its new home here in the mountains of Ephraim.

In June 2016, Scott asked me to help set out the excavation site and be the site architect. In the last three years of excavations, the team has revealed a large stretch of the Bronze Age city wall in the northern part of the tell. Digging between two previous excavations, the continuation of the 5.25m (10 cubits) wide city wall from the Canaanite period with storerooms on the inside, was traced. Storage jars and ritual objects were found in these rooms that were probably associated with a Canaanite temple that had stood at the summit of the hill. These storerooms were organised in units of three underground rooms with a narrower room on one side that served as an entrance from above. The remains of a nearby large structure are also being uncovered, in and near which Israelite sacred objects such as the horn of a stone altar and a ceramic pomegranate were found.

The absence of houses and streets also indicate that this site was used as a cult site for religious gatherings. This site was abandoned at the end of the Middle Bronze Age, in about 1550 BC and remained virtually unoccupied until the end of the 13th century. This appears to have been the time when Joshua gathered the tribes to divide the Land.

It would appear that Joshua took over this site and placed the Tabernacle there, presumably inside the remains of a Canaanite temple courtyard, as the linen curtains of the original court had probably perished by then. Indeed, the text of 1 Sam. 3:15 seems to indicate that this courtyard may have been replaced by a stone wall and possibly an entrance gate.  The cultic nature of the site made it therefore possible for the entire community of Israel to gather here for the division of the Land.

It would be wonderful if the location of the Tabernacle site could be determined.