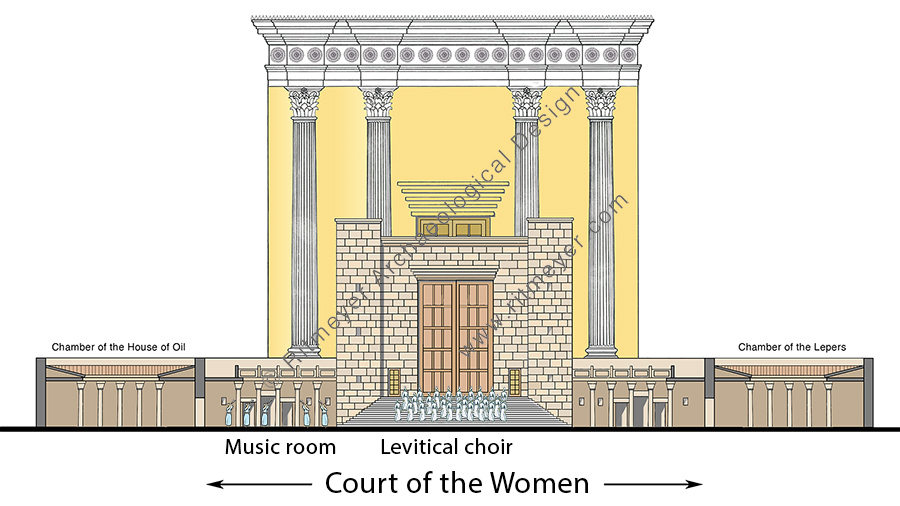 As noted in our previous post, music played an important role in the Temple services. Although the real service of praise in the Temple was done mainly by voice, this was often accompanied by the playing on musical instruments. Silver trumpets were blown by priests to accompany the sacrifices.

The Levites stood on the fifteen semi-circular steps to sing the Psalm of the day, and on other occasions, all of the fifteen Songs of the Steps, namely Psalms 120-134.

The number of instrumentalists was not limited, and not confined to Levites only. Middot Arakhin 2.4 indicates that some of these were from the families of Emmaus, another name for Bethel. The musical instruments were kept in a special underground chamber that opened to the Court of Women. We can imagine that when the Levites sang on the steps, the players on harps, trumpets and lyres, stood next to them in front of the Music Chamber.

This Chamber of Music is mentioned in Middot 2:6, “And there were chambers under the Court of Israel, which opened into the Court of the Women, where the Levites played upon harps and lyres and the cymbals and all instruments of music”. I previously speculated that some remains of this music chamber may have survived the Roman destruction of 70 CE.

So, let us examine the archaeological information.

The three openings had already been noticed in the 19th century by Conrad Schick[1] and Warren[2]. Warren noted that there was a hollow space behind the wall, and called it the Cell of Bostam. The name ‘Bostam’ appears to be a corruption of ‘bustan’, a group of trees and vegetation that grew here and which can be seen in some Crusader illustrations. Warren wrote that “in 1881 an attempt was made to obtain permission to open this doorway and explore the unknown cells and vaults. This was not only refused, but a large heap of earth was soon after piled in front of the closed doorway.”

For interest’s sake, the structure called Cell of Kashan to the south of the Raised Platform, has a cistern. Schick[3] noted that over this cistern (2 on the plan), the Kashan Mosque, which has long been demolished, once stood.

Below is a plan showing the location of the Court of the Women on the present day Temple Mount, followed by updated archaeological evidence we presented in our previous blog.

Next, I made an accurate elevation of the ancient stones in the eastern wall of the Raised Platform, showing the ancient stones at the northeast corner, and further to the south, the visible masonry on the sides of the previously mentioned arches.

To check if this discovery agreed with the description in Middot, I compared the location of this triple entrance with a reconstruction drawing I had made of the Court of the Women for a model I had designed many years ago.

After superimposing the newly discovered masonry on this drawing, I was pleasantly surprised to see that the central opening was exactly where I had drawn it earlier.

Behind the Levitical choir is the Nicanor Gate, and the Temple towered in the background. The musicians that stood in front of the Music Chamber have now been added to a previous drawing of the Temple Courts.

It must have been very impressive to hear the choir, accompanied by the musicians playing on their instruments, praising God. They sang different Psalms each day, and on the Shabbat they sang Psalm 92, “It is good to give thanks unto the Lord”.

Now, of course, we can praise God wherever we like, at home or in a congregation, but it is good to remember that acceptable worship was first instituted by King David who wrote the Psalms, which were sung in the subsequent Temples of Jerusalem.